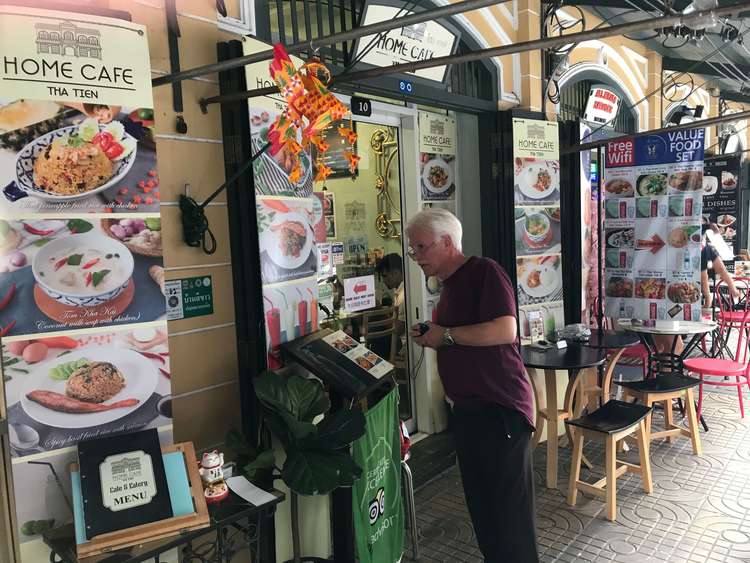 The rather unimaginatively named ‘Home Café’ is situated close to Wat Pho in Bangkok, on the busy strip which I imagine is a step out spot for tourists after they visit the temple attraction. 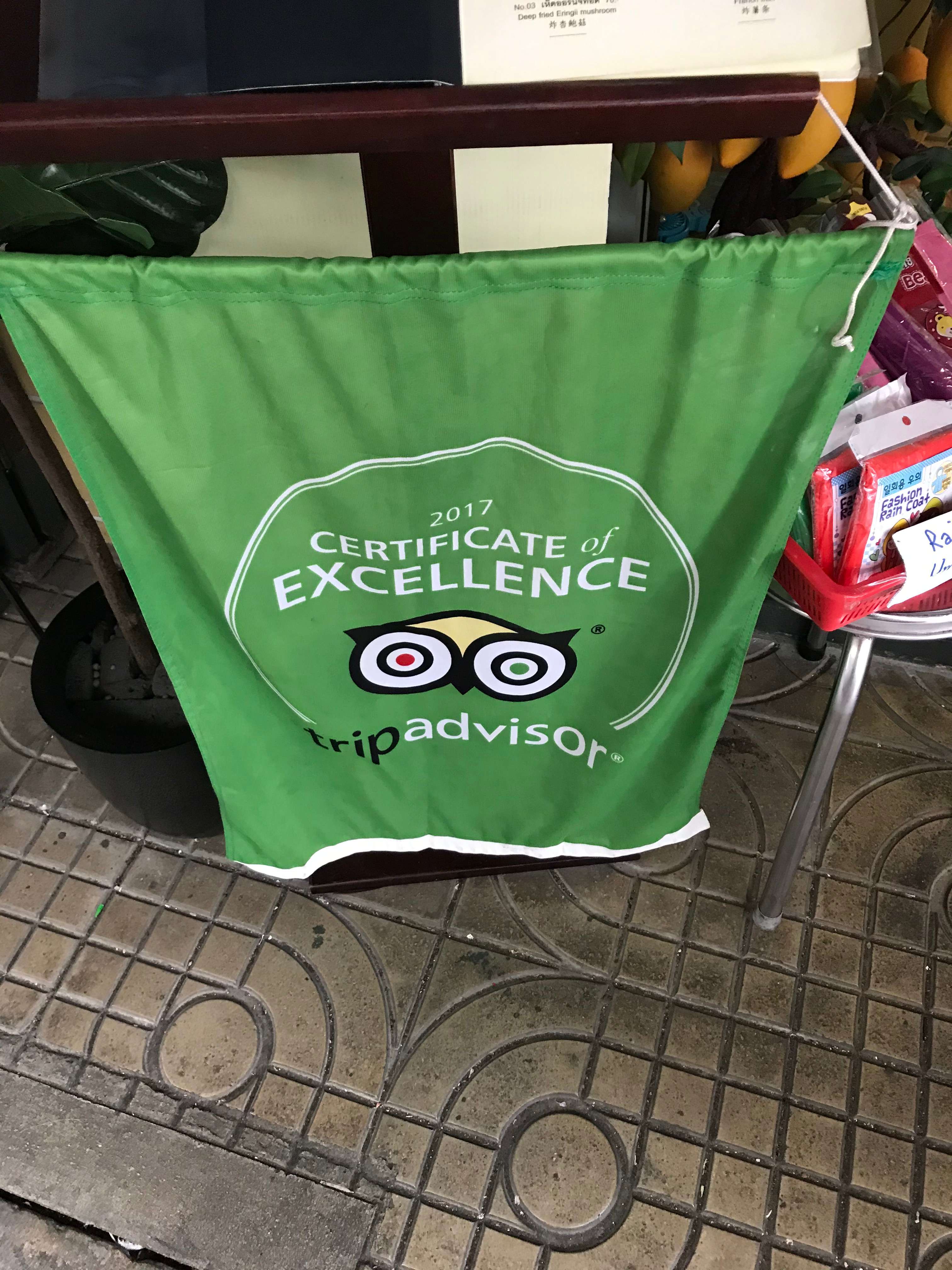 After walking up and down trying to decide where to eat, we were drawn in by the lure of yet another TripAdvisor sign and the promise of free Wi-Fi.

Obtaining a panoramic shot of the outside was testing for me. 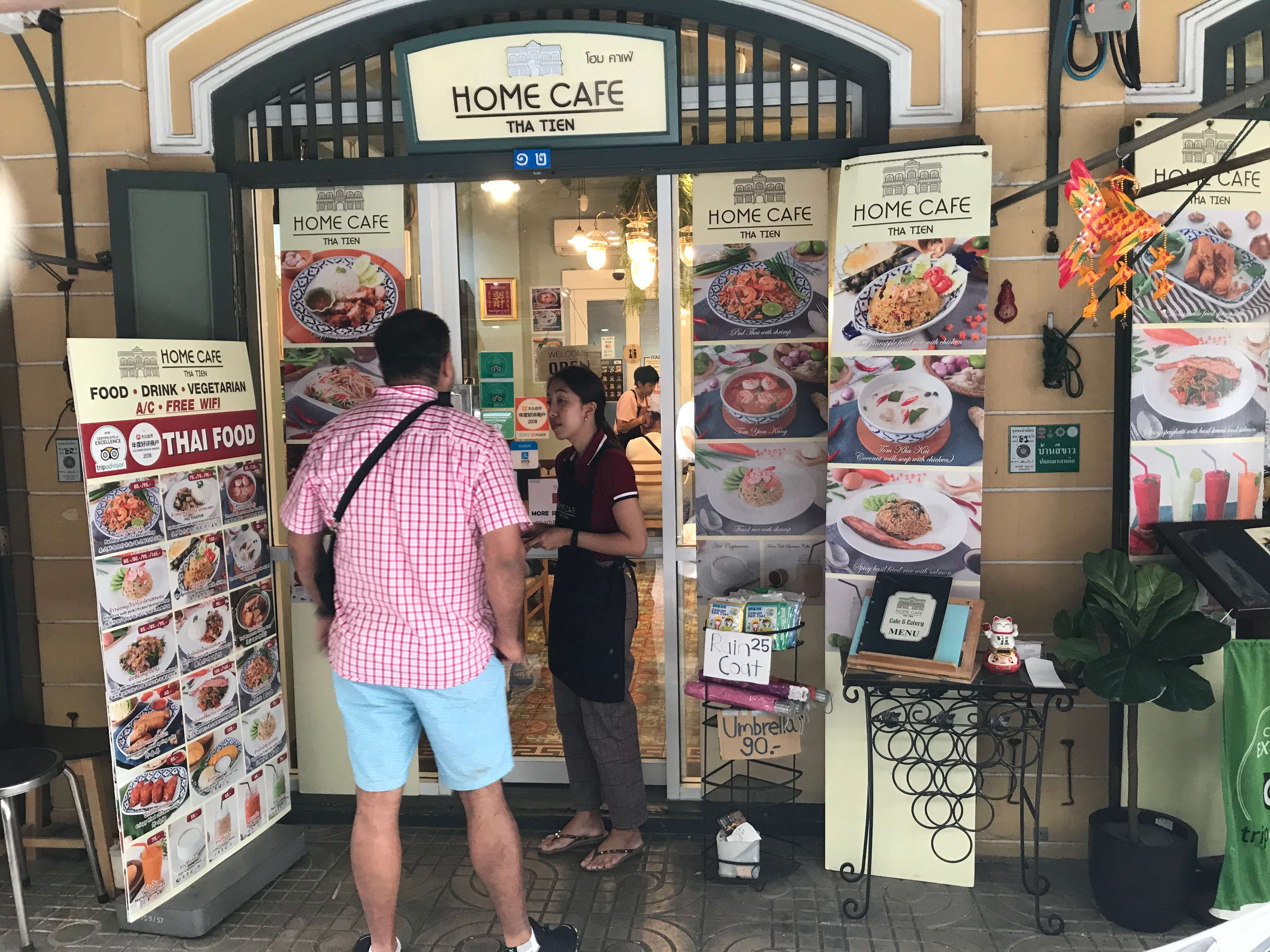 If @goblinknackers' arse wasnt in the way this would have been more suitable as the main one.

Too far away and you won’t see it due to the amount of billboards and advertising on the street.

Too close and it doesn’t give you an idea of the surrounding areas in context with the restaurant.

I had to compromise with closer photographs lest I ended with none at all. 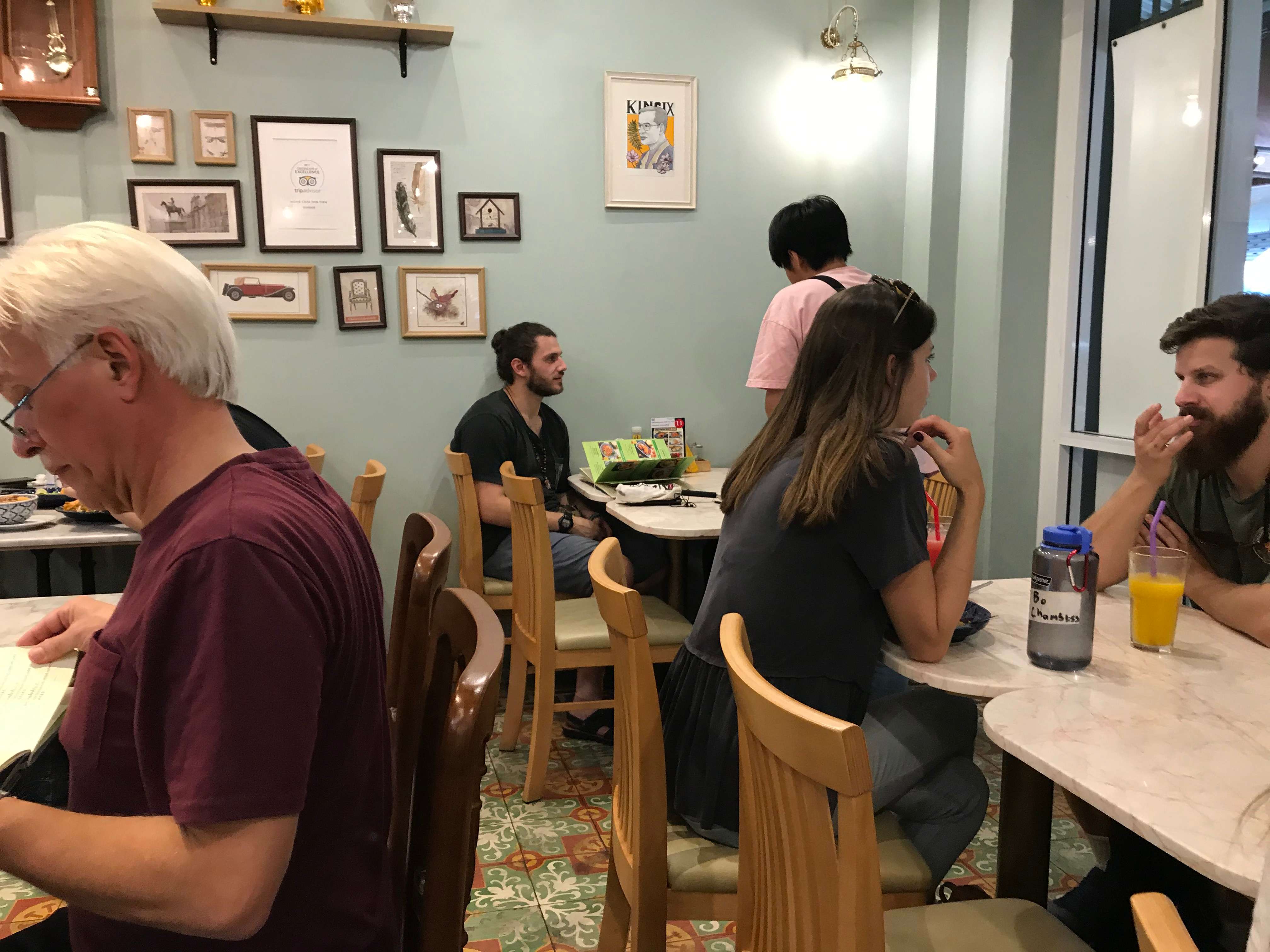 Inside was quite busy and the air conditioning pleasant. 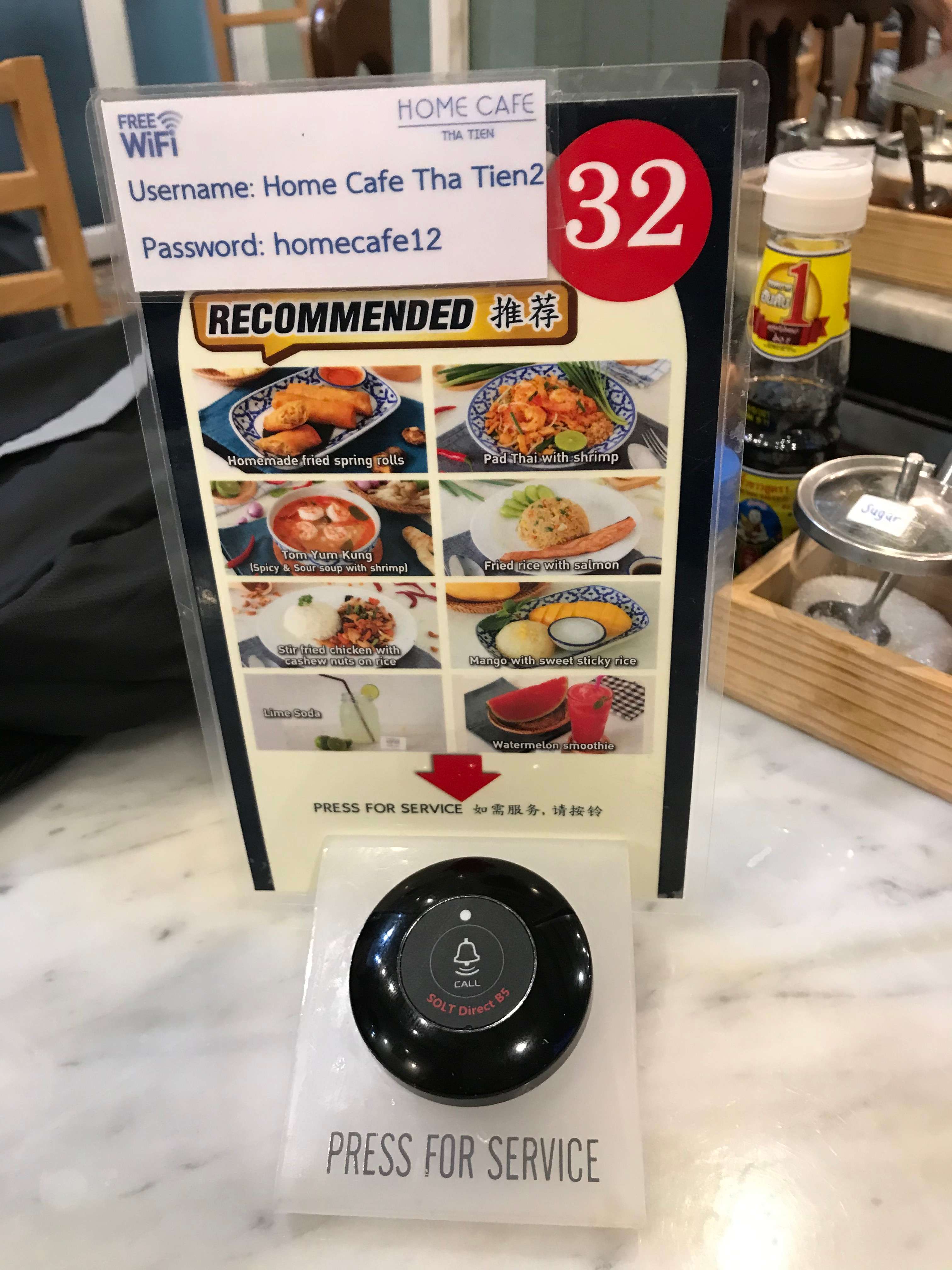 We sat and studied the menus while connecting to the free Wi-Fi that worked admirably. 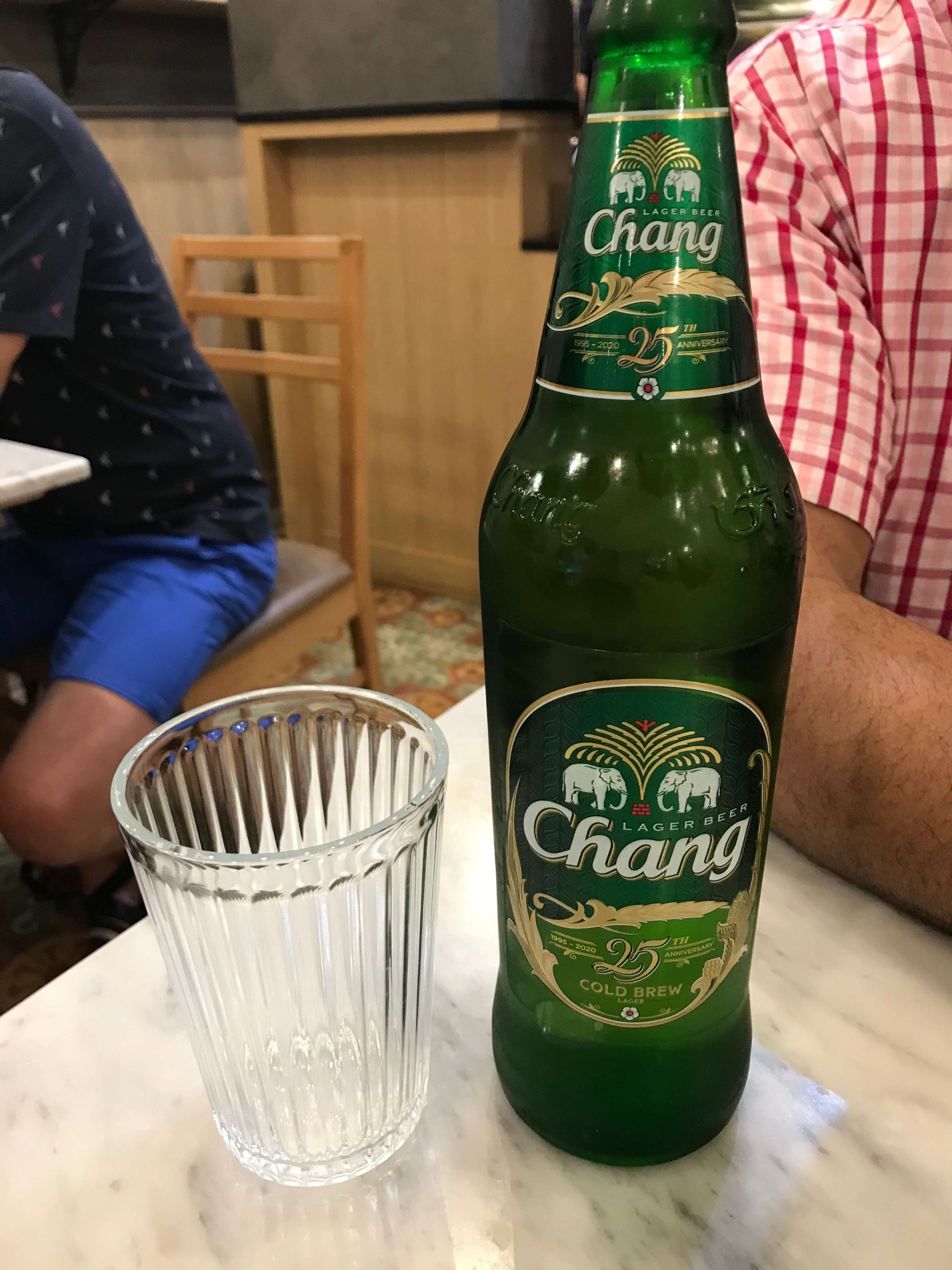 While @goblinknackers ordered a large Chang beer, I went for a Latte and was glad I did. 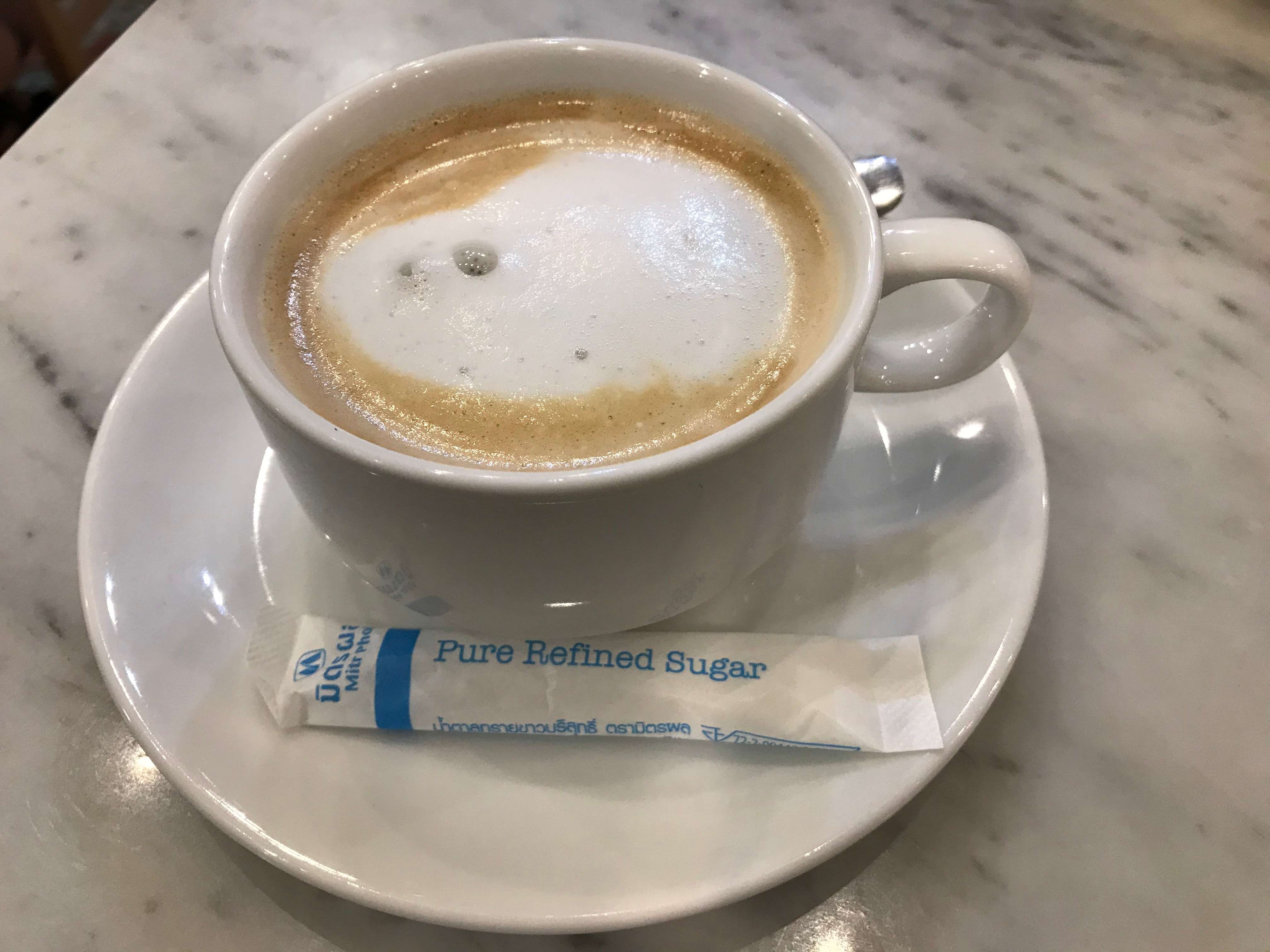 Yes, it’s just a simple hot drink but it was one of the finest I have ever cared to taste.

They do know how to make great coffee at the Home Café. 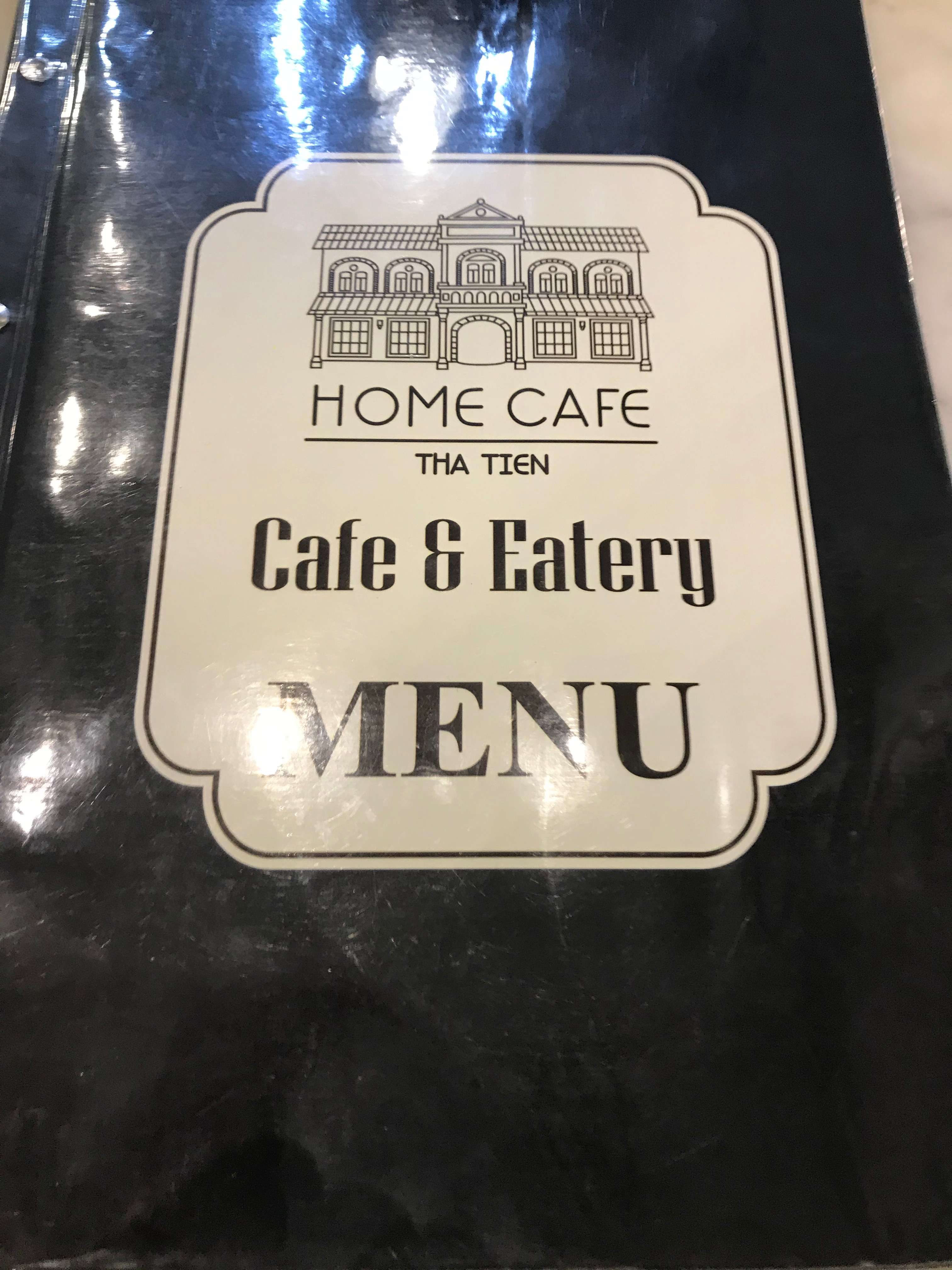 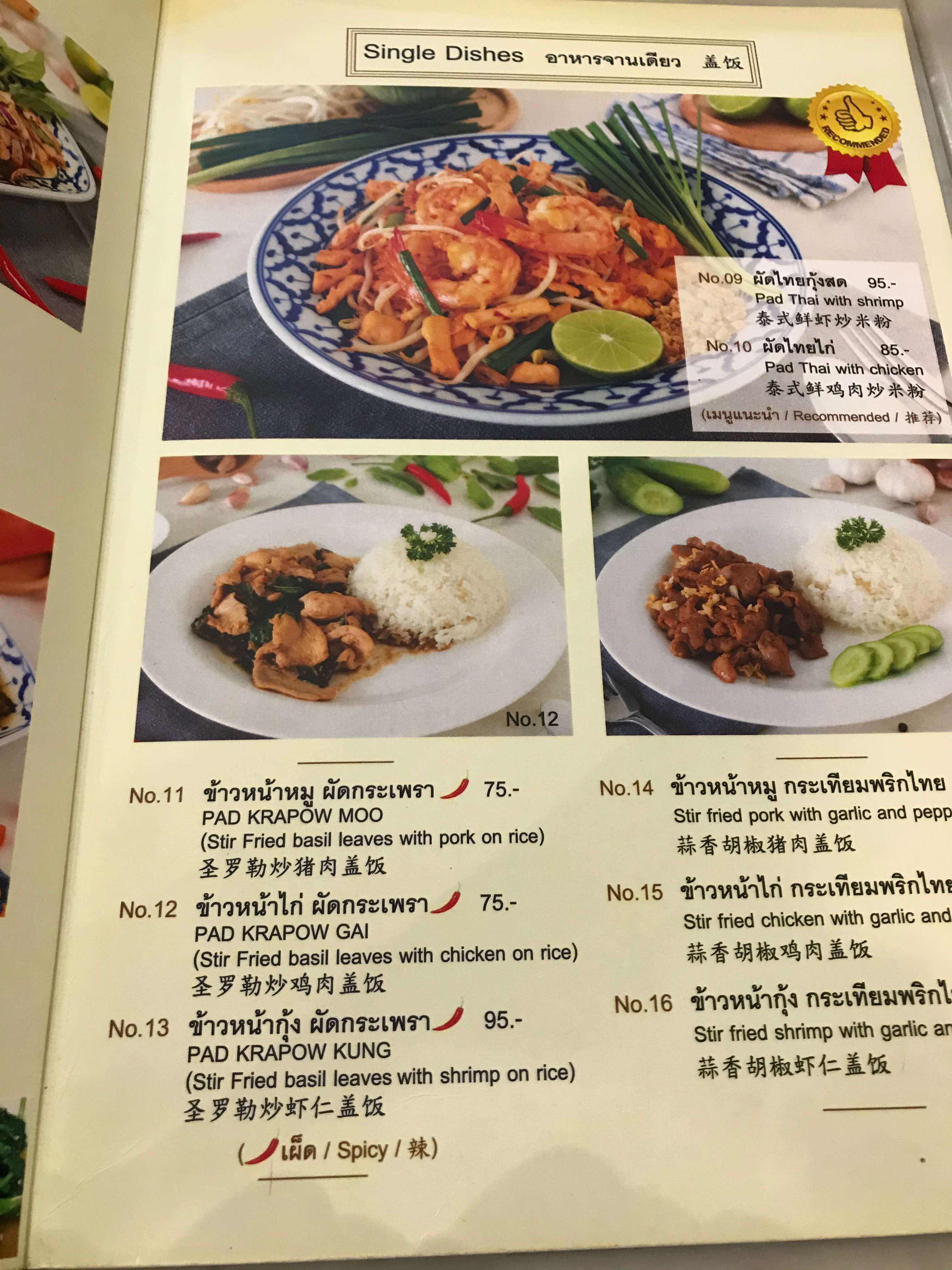 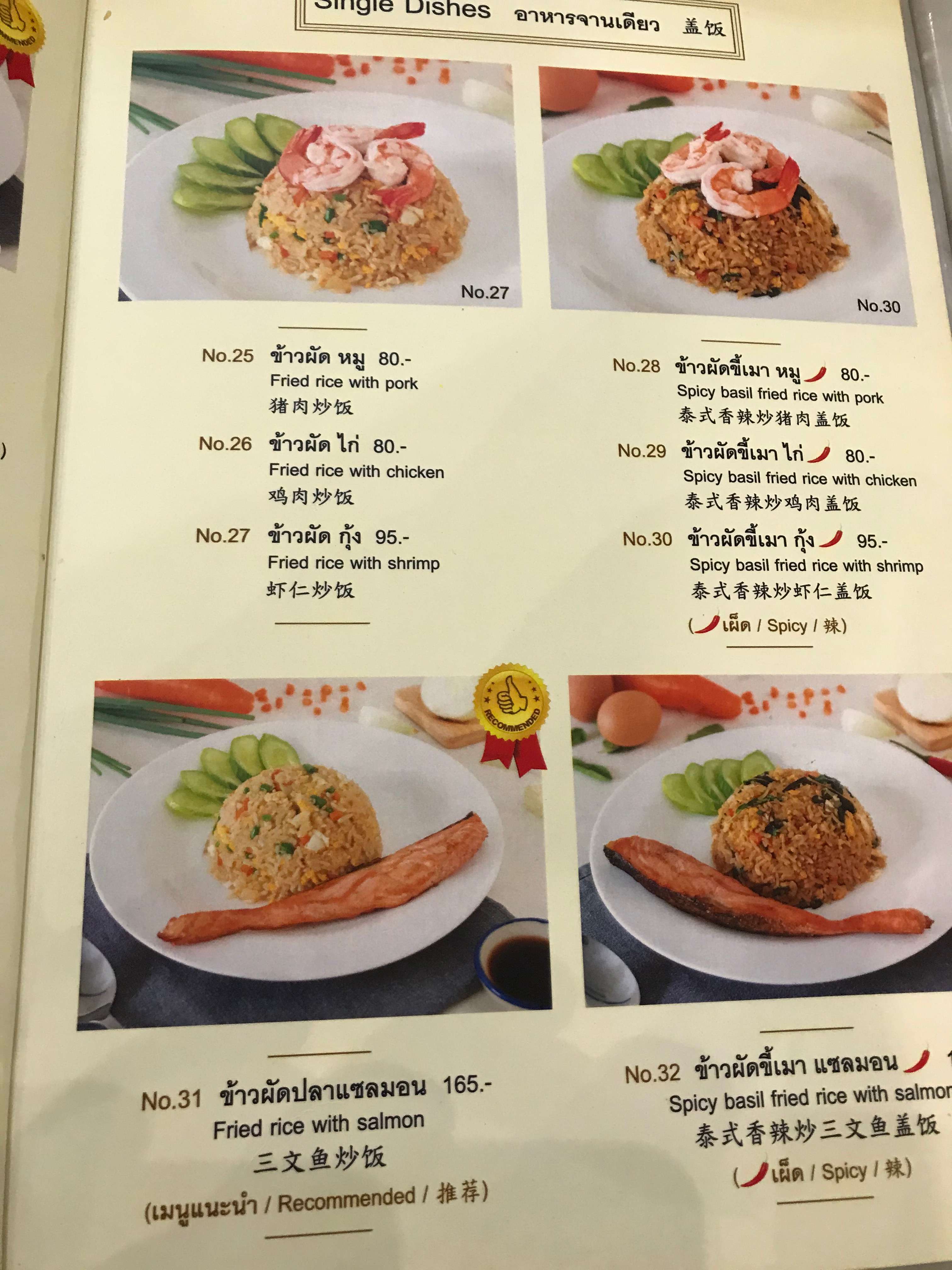 Like many restaurants in Thailand, the dishes tend to have a photograph each and so I took just a few snaps of these as samplers. 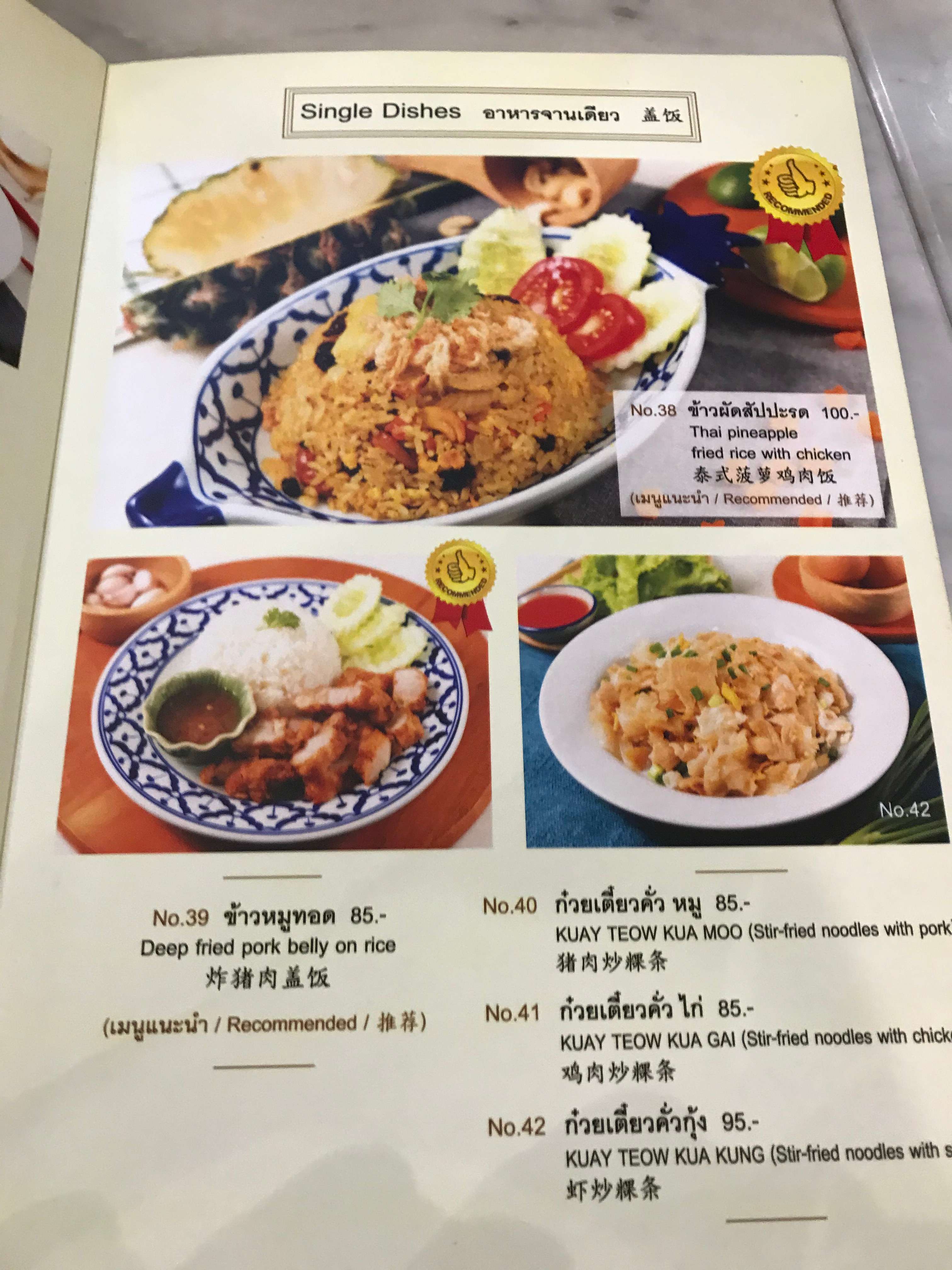 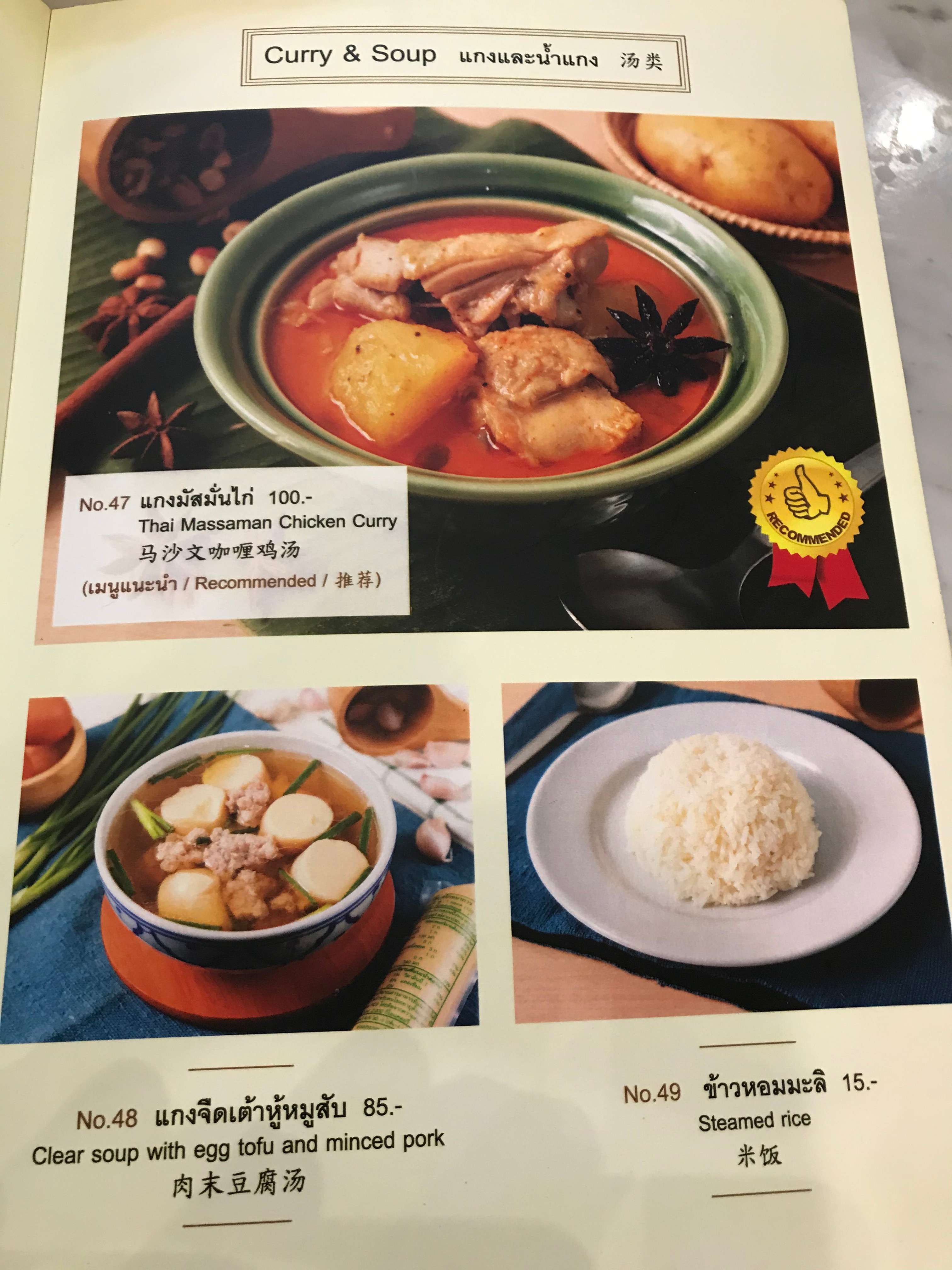 @goblinknackers was feeling extra hungry (or should I say greedy) and ordered a Tom Yung Kung soup at 120 BAHT, followed by a main course of Green Curry with Chicken at 85 BAHT as well as a side of rice. 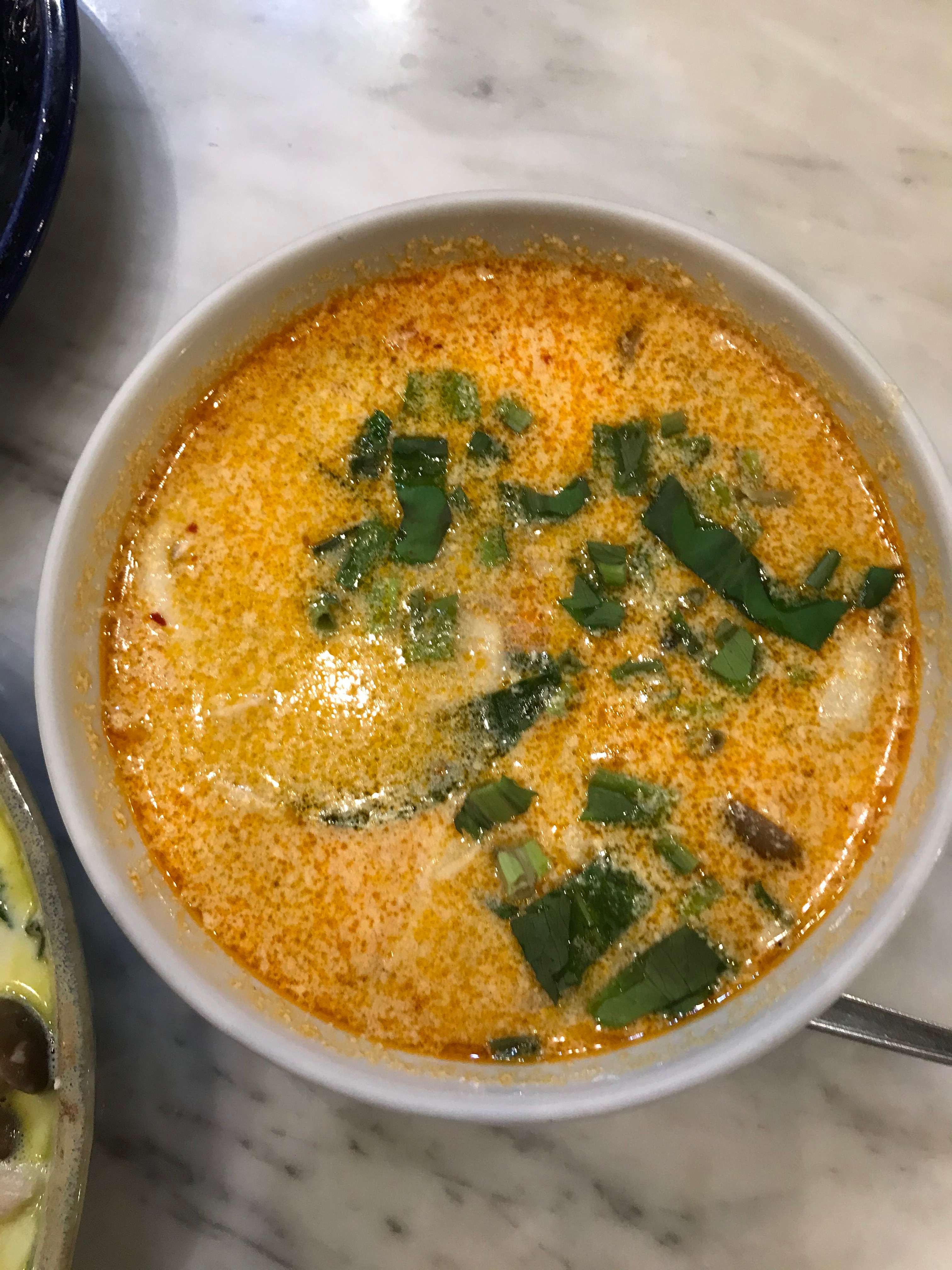 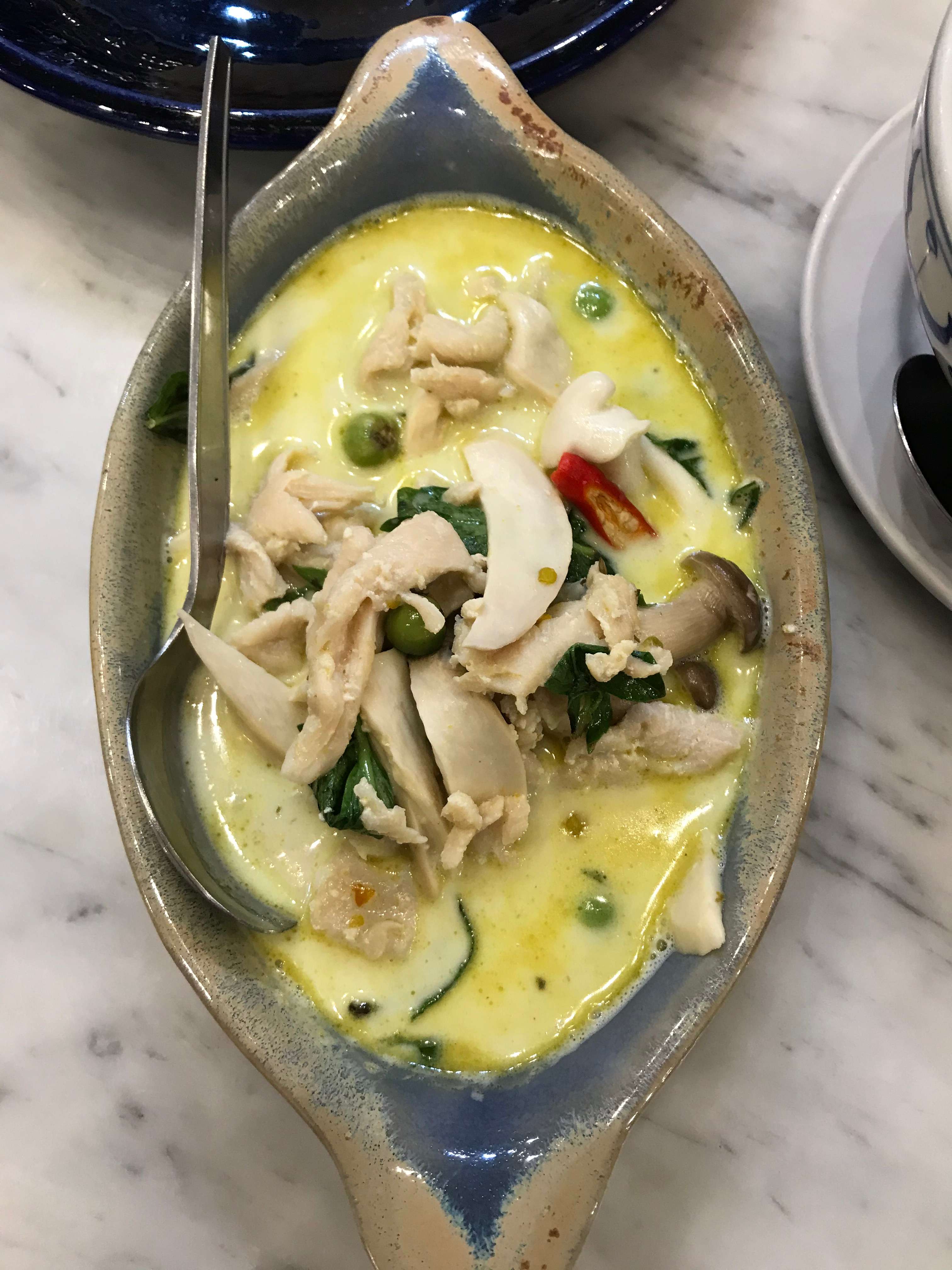 I ordered a Stir Fry Noodles with Pork at 85 BAHT, not being such a lover of rice.

His food was delivered quickly while I was left feeling hungry and frustrated.

After prodding a waiter, the food appeared as if by magic.

They either have some ingeniously way to cook food in 2-3 minutes or the turnaround and demand is such that it’s always ready. 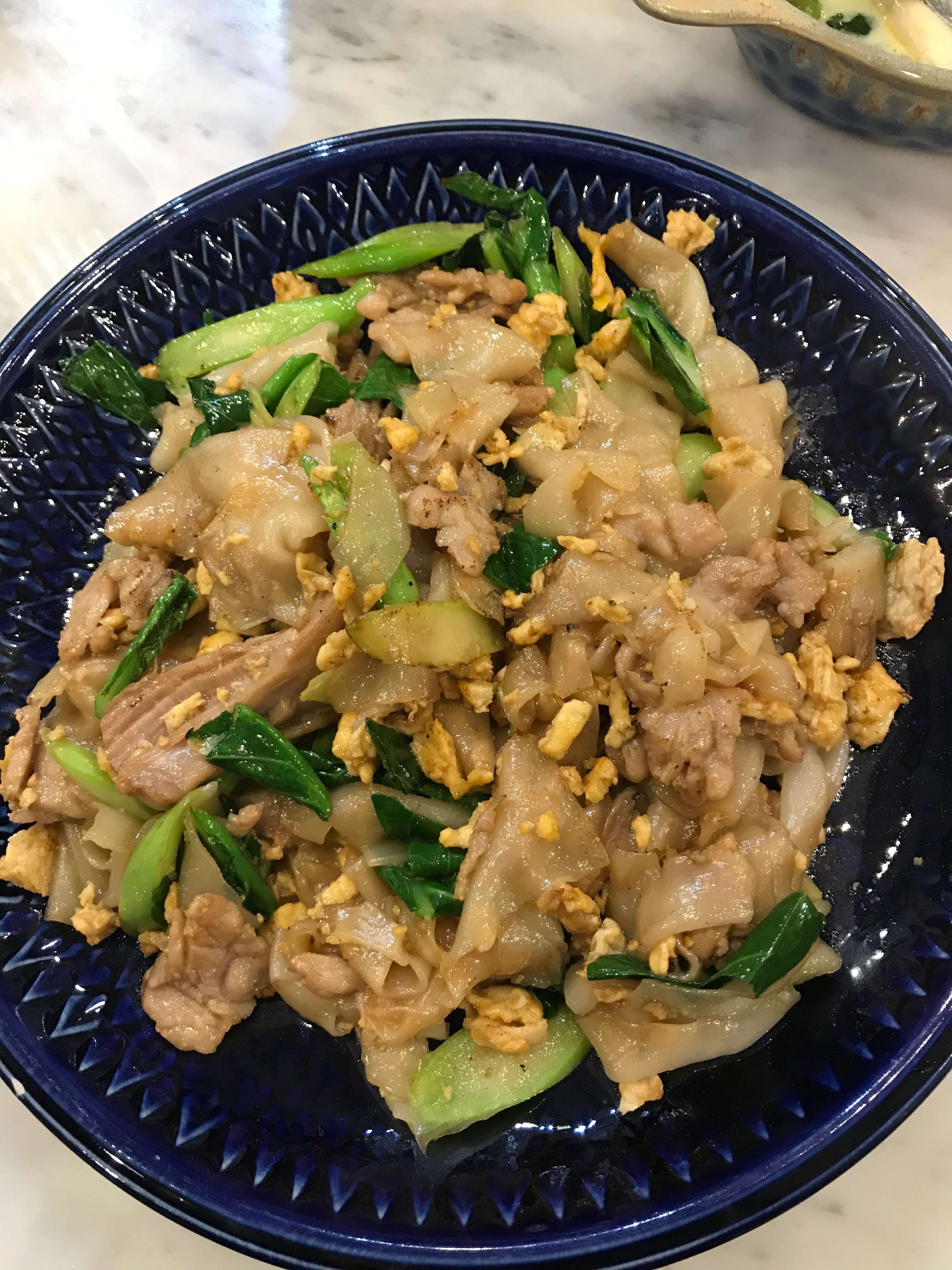 Having seen @goblinknackers’ food I was a little disheartened, it didn’t look as good as his, damn.

You can’t always judge a book by its cover so I dug in to the Stir Fry Noodles with Pork hoping it tasted better than visual impressions.

While it was tasty I found the noodles a little slimy, though I did finish the plateful.

The level of spice was minimal and I felt the dish was lacking something. 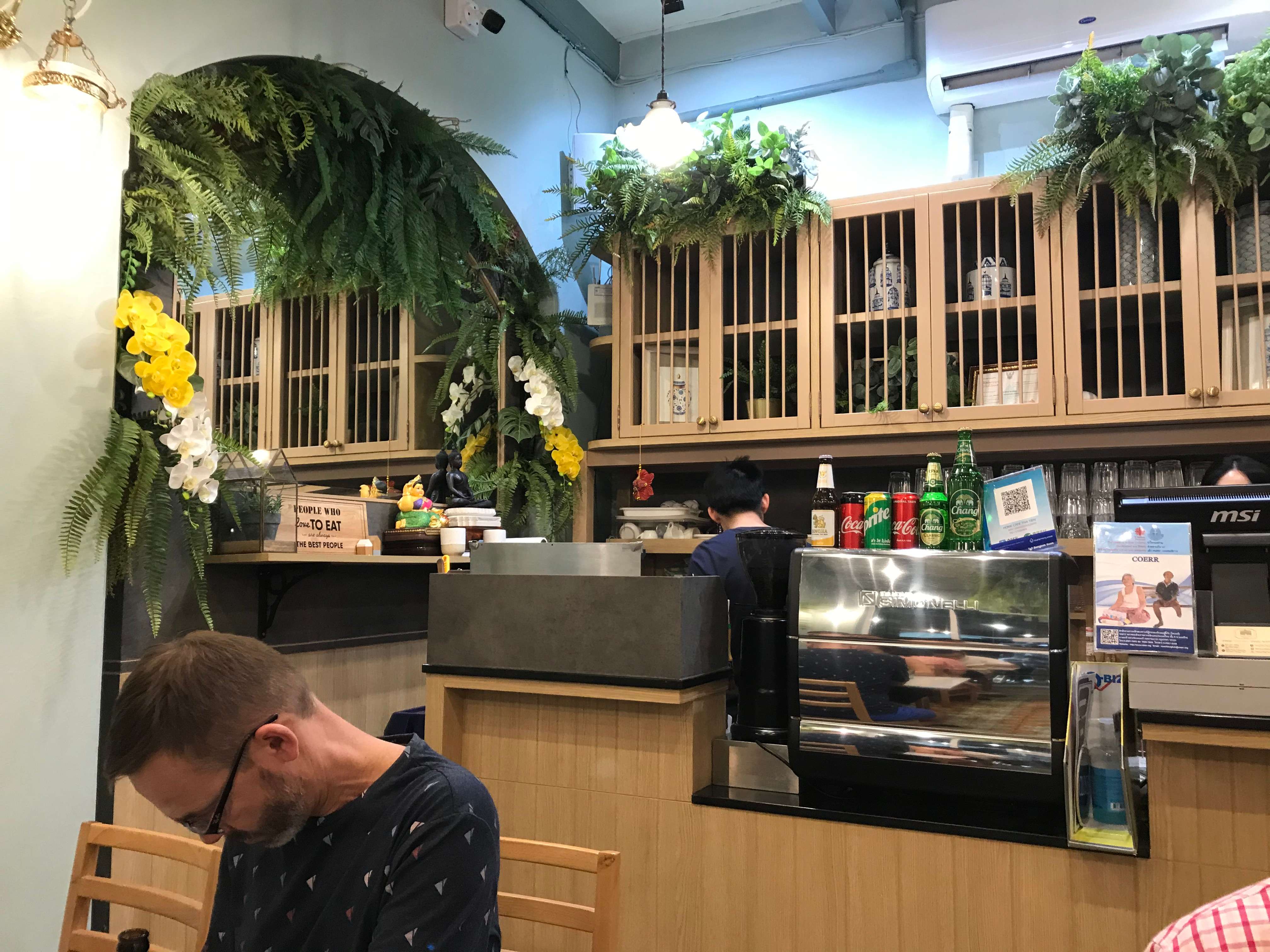 …’not to slate the restaurant, I felt I ordered the wrong dish’...

There were no apologies in order about the lateness of the food or the fact that they had entirely forgotten about me.

It wasn’t a big deal and I put this down to differences in culture. 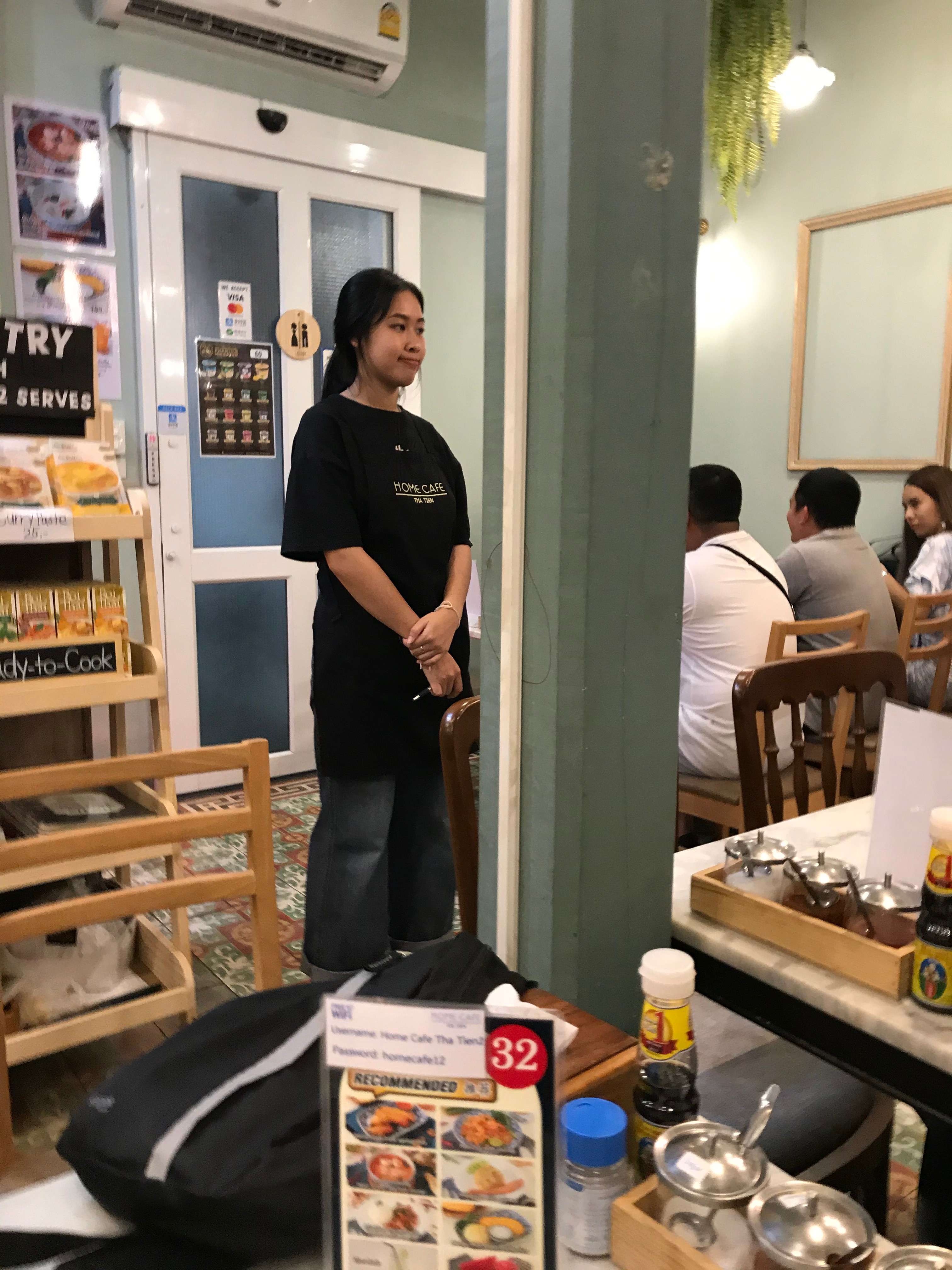 The other diners were a mixture of westerners and what I might consider to be natives or locals.

The atmosphere was pleasant and I feel this restaurant has some legs and is quite popular. 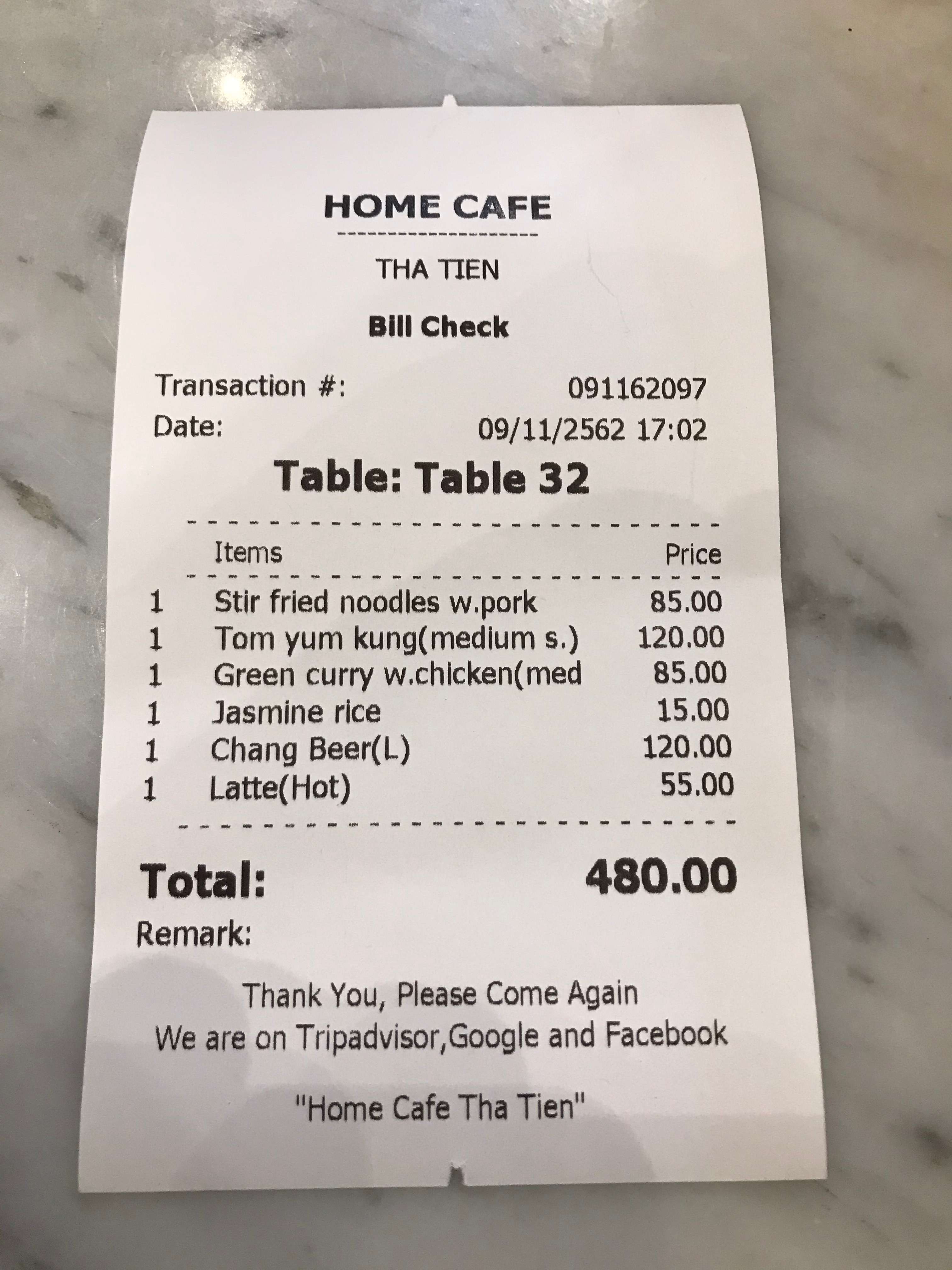 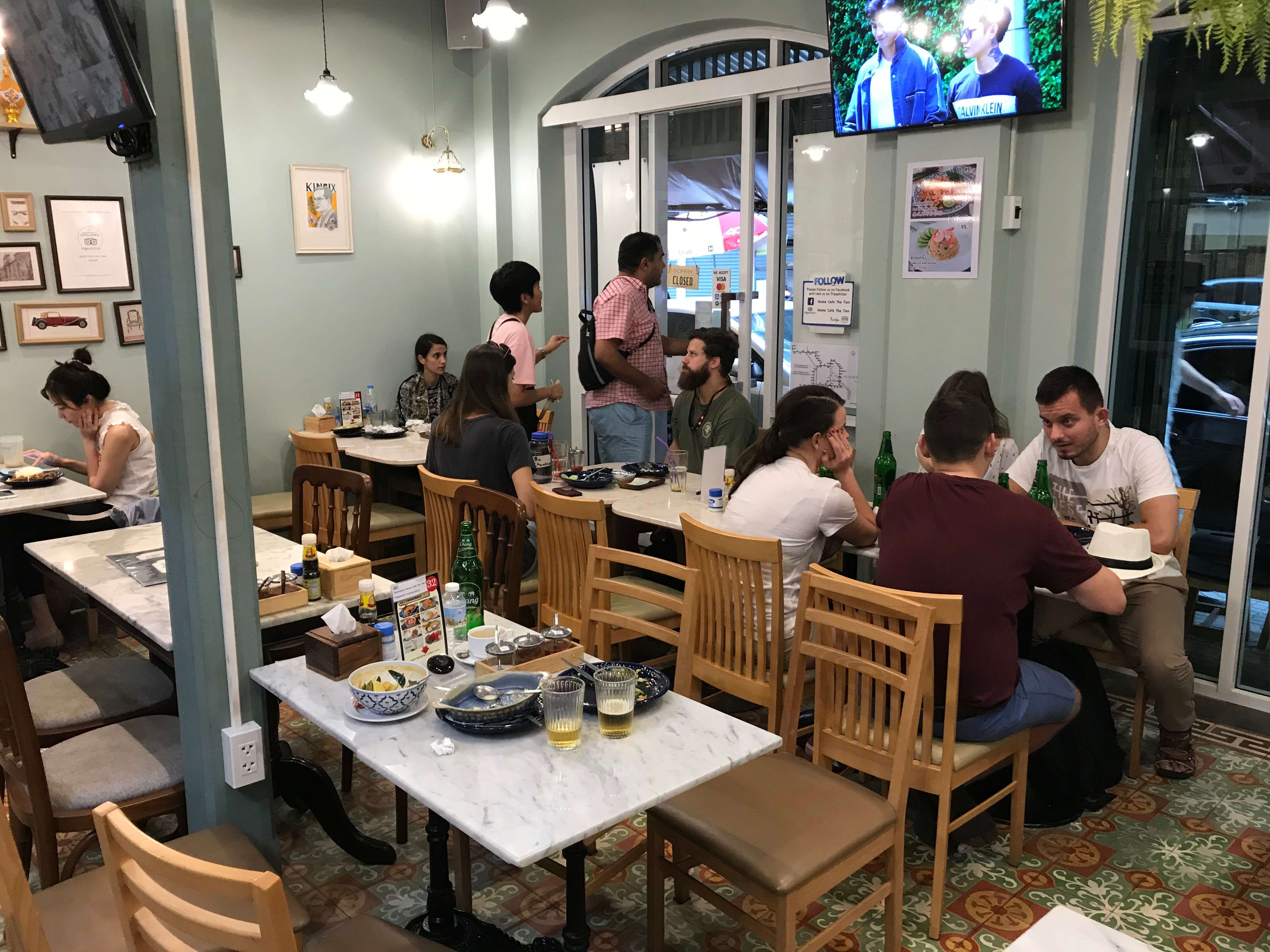 I would happily give the Home Café a second try if only to experience that coffee again!

How much???!!!!!! It just shows the massive differences down town to everywhere else!

As for the coffee @steevc . There are little coffee shops everywhere but it's as if they were jumping on a trend . The really top quality small coffee shops do ok but generally coffee isn't big. Most coffee shops sell more iced drinks and frappes than hot coffees.

Nicely decorated place though and that is often the difference.

It was cheap to us! we were used to the Prince Palace hotel prices by this time which were more akin to London.

I tasted coffee similar to this once in Makati, not sure how they make it so good.

It would be useful if the UK could adopt this, half the time you end up with something that looks like a sweaty sock instead of a lamb chop.

That is too bad that you don't feel you made the right choice. I hope you at least had one really decent meal while you were in Thailand. It seems like a very diverse place with lots of things to choose from.

I never found the ultimate place, except for maybe the first night. Would have been good to have more time and to try some others.

Not that I have been there for maybe 20 years but i found prices real cheap there back then, I guess they have of course gone up since then, and compared to most places thats a really good deal

I have heard the prices have risen a lot in recent years, it was my first time so can't compare.

I go to Tha tien and around there every so often. I think I have seen this one but never really given it a go. Maybe I should just go for a coffee next time :D

I have been meaning to ask you something. I have just one more restaurant in the bag.. but can hardly review it if I don't know the name. Could you translate for me please?

What should I name this?!!! 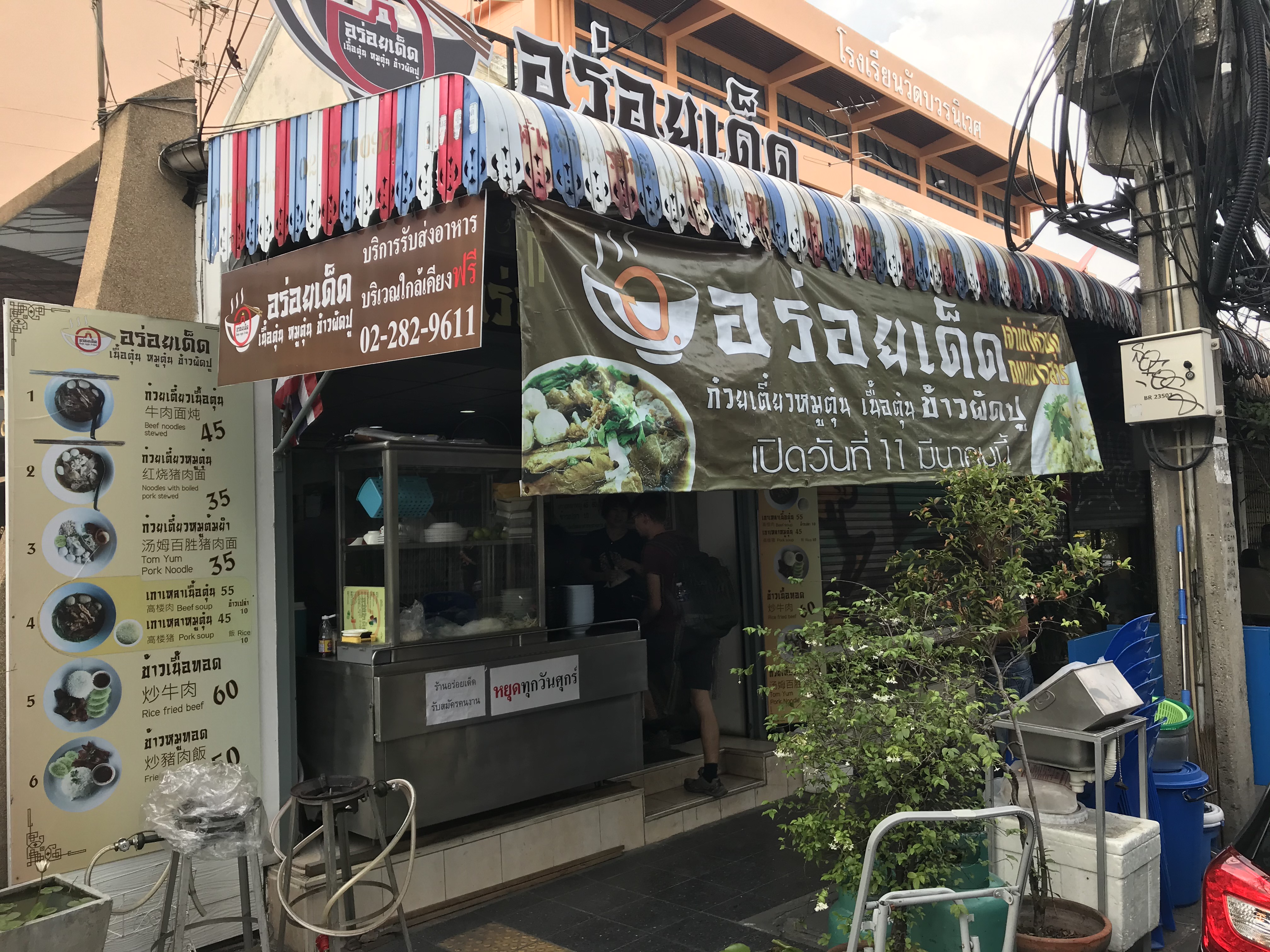 Is that the name of this place? I can hardly call it that!

I will take your word for it... very cheesy name.. and it was far from SUPER DUPER DELICIOUS :)

LOL > and it was far from SUPER DUPER DELICIOUS :)

Do you have to prove yourself to the guardian of the toilet before you can enter? Great review and I’m not sure which I want more now, a beer or a coffee..

Do you have to prove yourself to the guardian of the toilet before you can enter?

I dared not enter, the guardian of the bogs looked too forbidding for me.

The coffee would always win but not everywhere. It looks quite normal.. I don't know how they made it taste so good.

Some ancient recipe no doubt... I was going to use the word “bog” in my initial comment but didn’t know if it was a familiar term...it one of my favourite words, so bravo for keeping it alive. LONG LIVE THE BOG!!

LOL, not sure if our foreign readers will know what it means.., it is very British.

Do they drink a lot of coffee in Thailand? I guess it's big everywhere these days. The food looks good anyway.

Do they drink a lot of coffee in Thailand?

I couldn't tell you, beer didn't seem a good idea as we were walking around and it was hot. By the pool it might have worked, but I get dehydrated easily in hot countries.

Hydration matters when it's that hot. Mind you, coffee can go straight through me :)

@goblinknackers needs to do a post with his impressions of the trip.

He keeps going on about it, but failing to deliver. He's got some interesting video clips. I will say nothing further.

Thank you for entering our <All about noodles> Contest . Thanks to @slobberchops, Tasteem has become a more attractive guide. We upvote your post, wish you the best of luck in winning our Contest!

You just got a 11.07% upvote from SteemPlus! To get higher upvotes, earn more SteemPlus Points (SPP). On your Steemit wallet, check your SPP balance and click on "How to earn SPP?" to find out all the ways to earn. If you're not using SteemPlus yet, please check our last posts in here to see the many ways in which SteemPlus can improve your Steem experience on Steemit and Busy.

Hey @slobberchops, here is a little bit of BEER from @tattoodjay for you. Enjoy it!

Your post was upvoted by @steem-ua, new Steem dApp, using UserAuthority for algorithmic post curation! Your UA account score is currently 4.588 which ranks you at #1934 across all Steem accounts. Your rank has not changed in the last three days.

In our last Algorithmic Curation Round, consisting of 91 contributions, your post is ranked at #44.

Evaluation of your UA score: