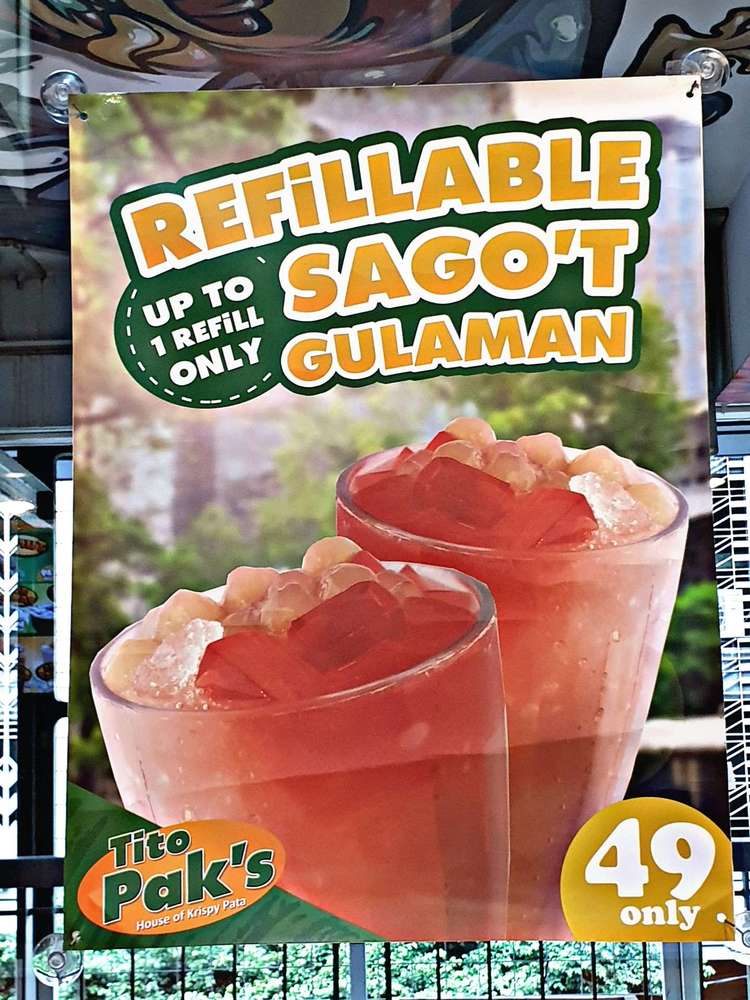 Buy one take one at Tito Pak's

Fee weeks ago during one Saturday, I was walking along the bridgeway from Solaris building towards Landmark in Makati City when the promo poster above caught my attention. It was hanging by the glass wall of a restaurant that is not familiar to me. I looked through the glass wall and saw this Tito Pak's backlit logo. I do not know the restaurant. This is my first time seeing a Tito Pak's restauran. 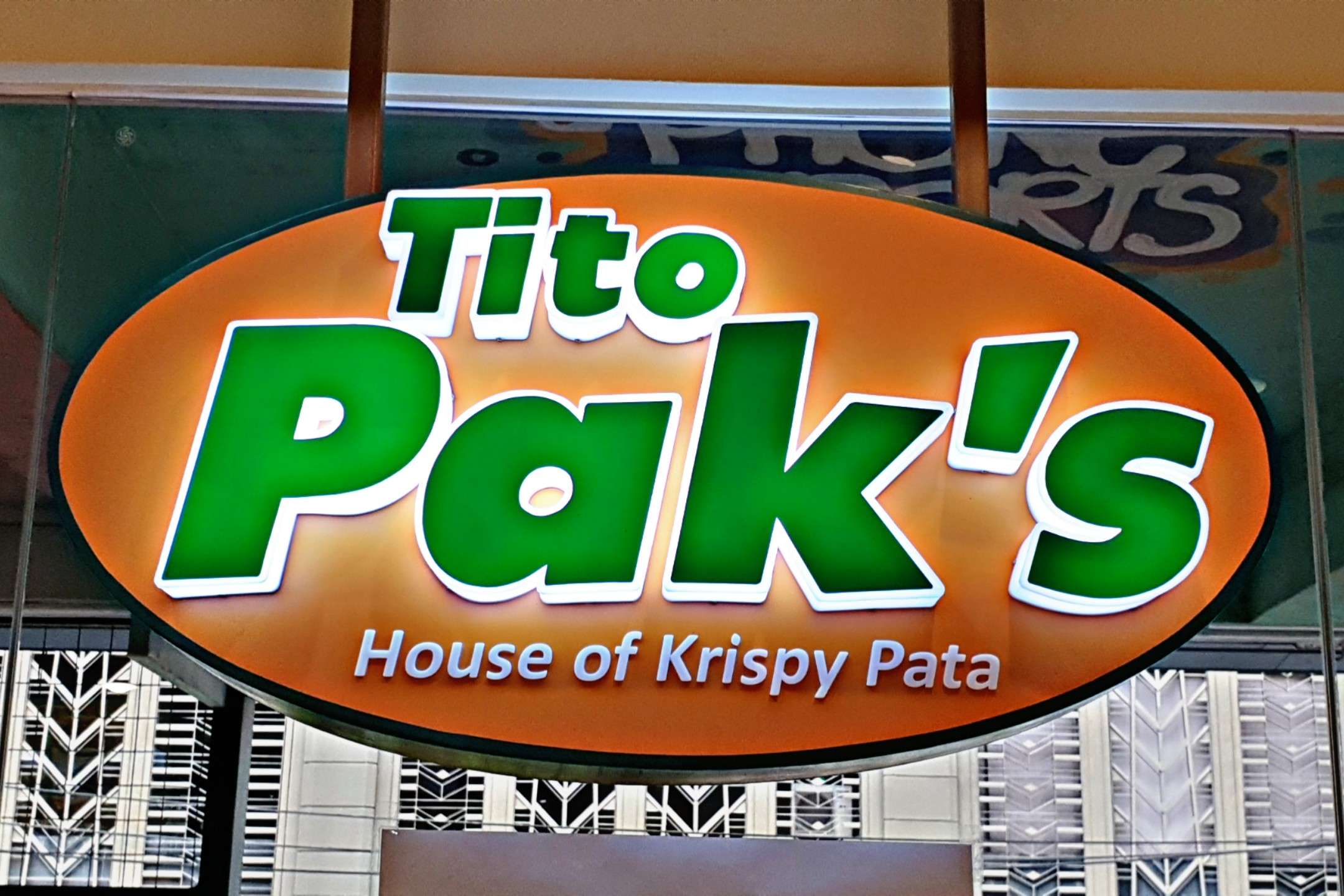 I looked at the promo poster again. It is for a Filipino beverage called sago't gulaman (contraction of sago at gulaman). It is made of brown sugar, water, gelatin and sago. Sago is powdery starch extracted from pith of palm tree and processed like pearl. Gulaman means gelatin. 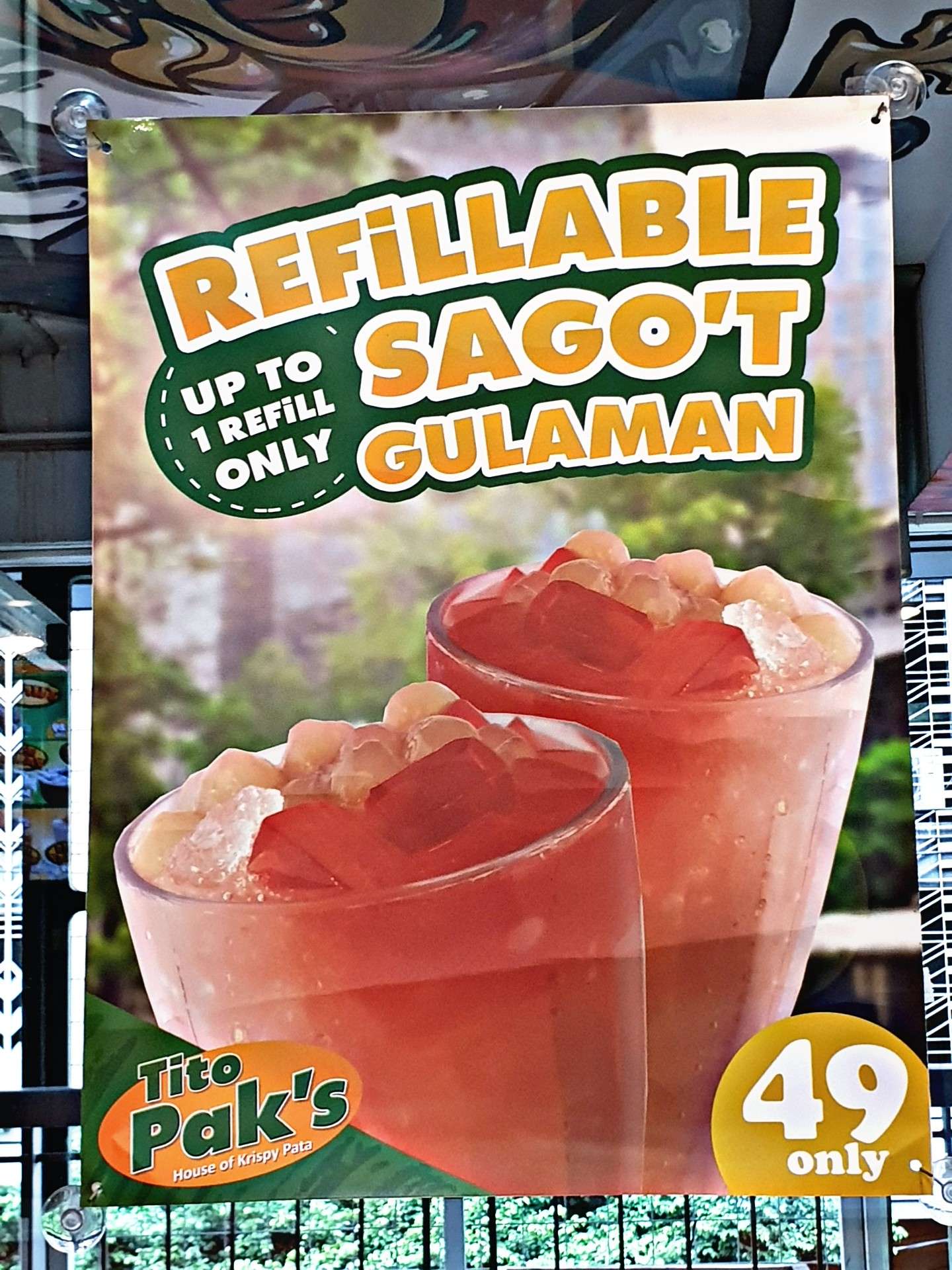 At first I thought the promo is bottomless or unlimited refill. It was good that I spotted that small circle that clarifies the limitation of the promo - up to 1 refill only. I got curious of how big the serving is so I got in and ordered one. While placing my order, I had a quick chat with the cashier and one of the crew. I stated my observation that it is only them who are open along the bridgeway on a Saturday and they acknowledged. The cashier was saying, they also close sometimes on a Saturday. 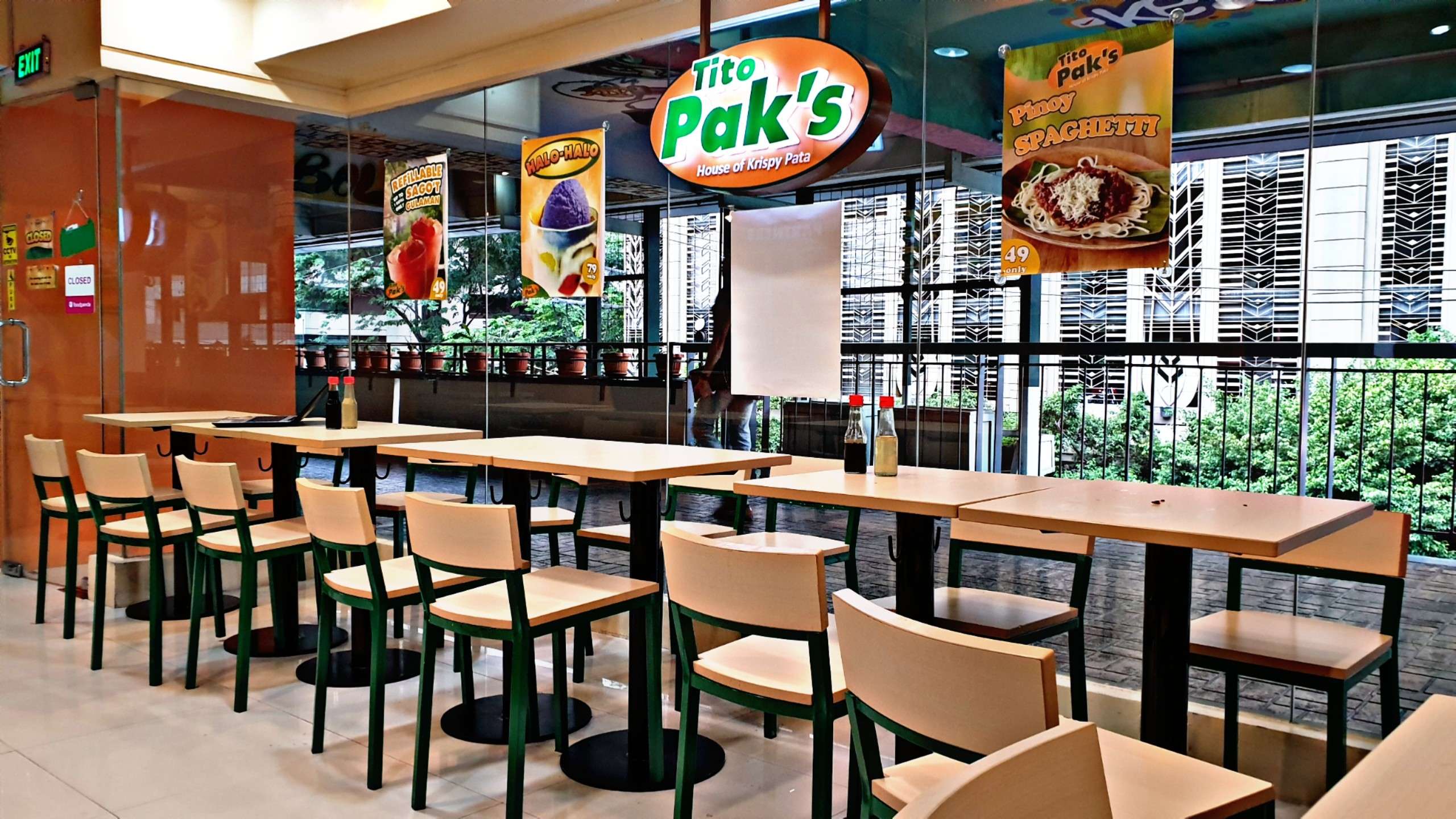 While waiting for my order, I went through the table menu. They have unlimited rice option. Ah, this could be Mang Inasal's tight competitor in regards to that offer. 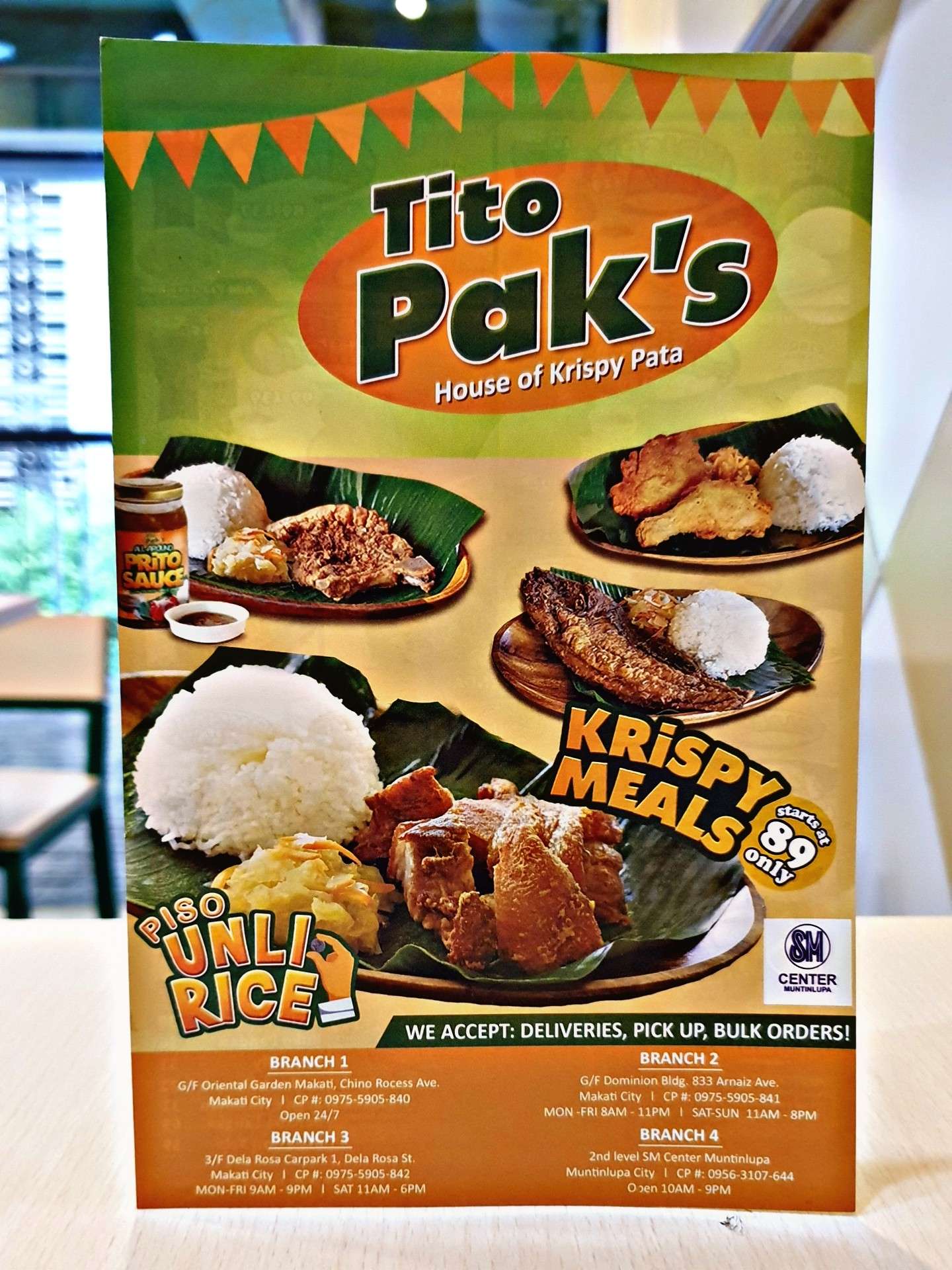 They also have wide variety of meal options to choose from. It may be good to try one of these the next time I pass by. 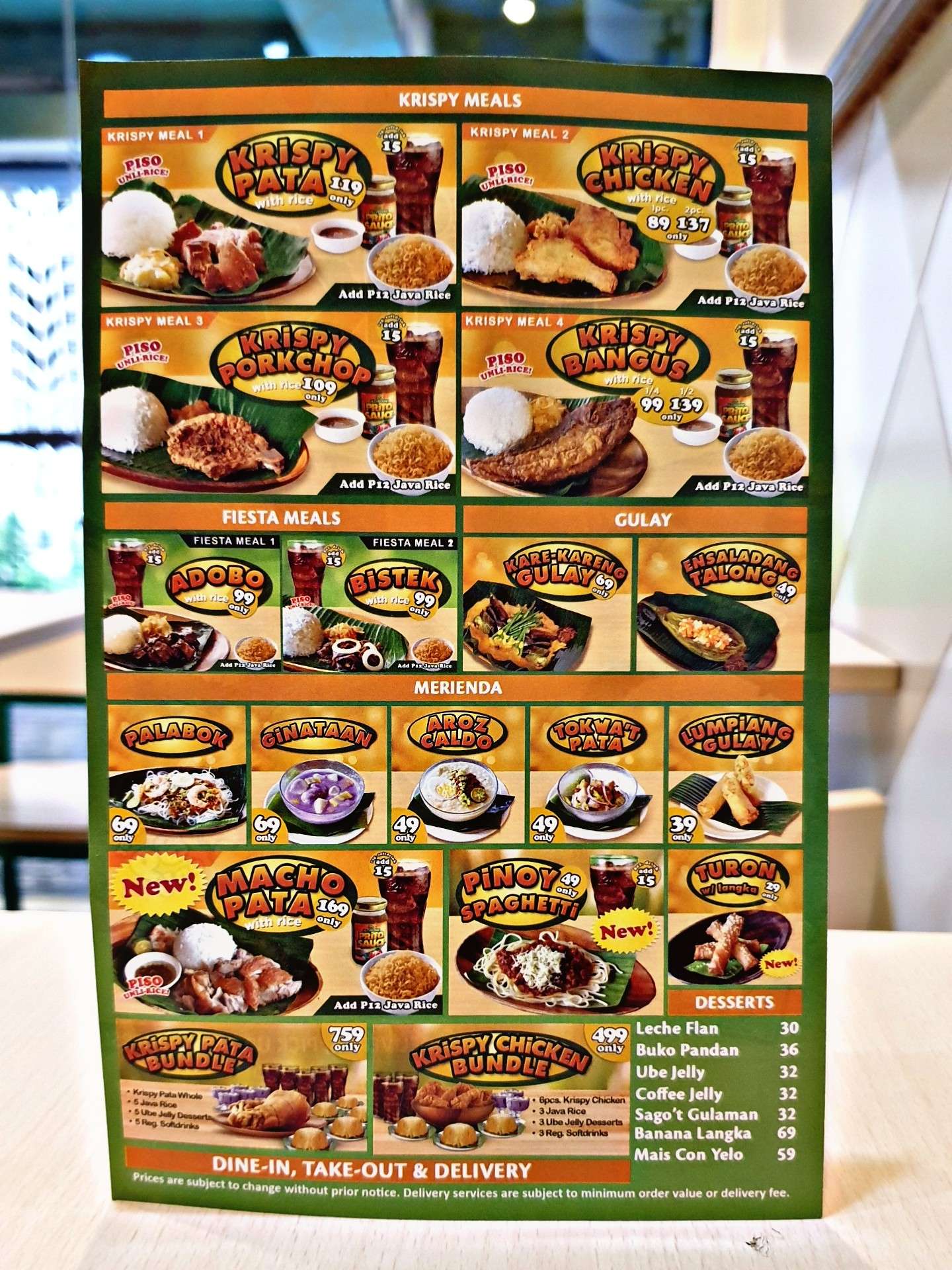 When my order was served, I was so happy to see that the sago and gulaman are on top. That means there are many of the ingredients and not mostly water that will just drown the solid ones. 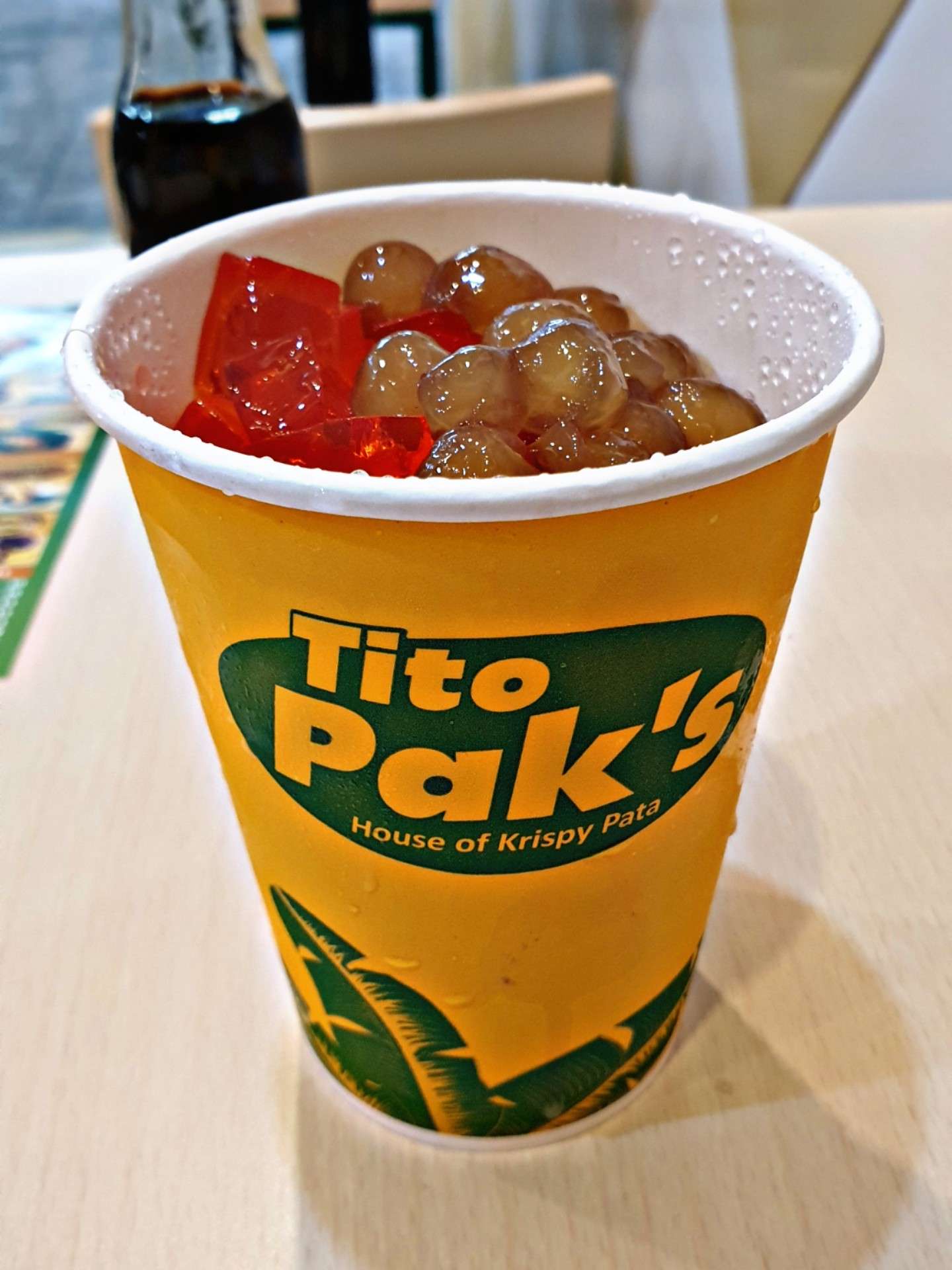 I shook the paper cup and the solid ingredients sank. Apparently, its water is not plain water but with crushed ice. I think half of it was water and half was crushed ice thus the not so liquid state. Now that's even cooler! This is good for those who are leisurely killing time in the restaurant so the beverage do not get warm in a short time. 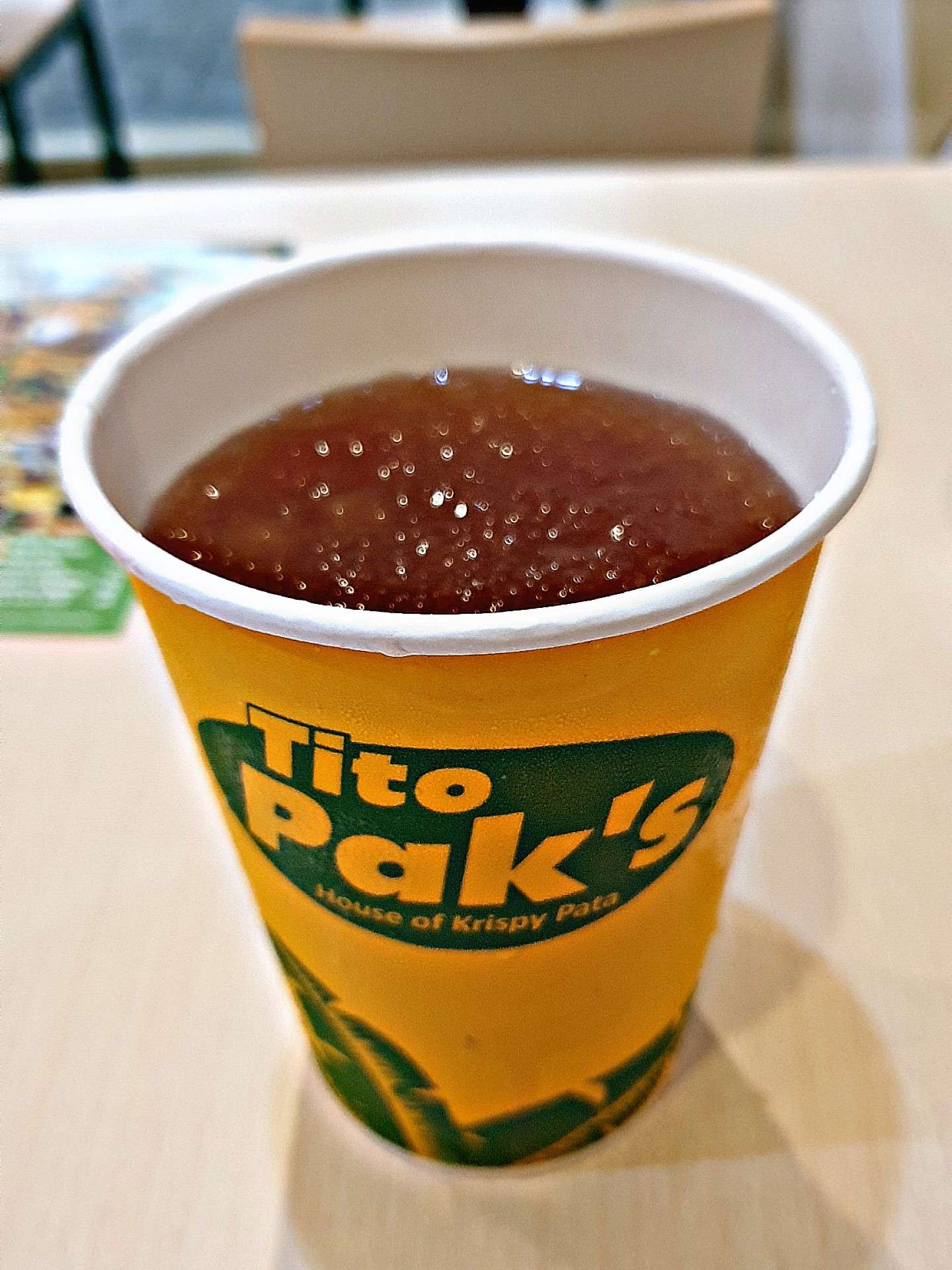 Since it was a lazy Saturday afternoon when I hot nowhere else to go, I took my time finishing my drink. After which, I asked for refill and realized that the refill no longer has sago and gulaman but just the liquid part of it. Now that's clever! I think the price of P49.00 (US $0.95) is fair enough for regular 12 oz. cup and a refill of the concuction.

When I got out, I had one last look at the restaurant before I left. Who would think that right at the back of this very cozy plazy is a parking area? 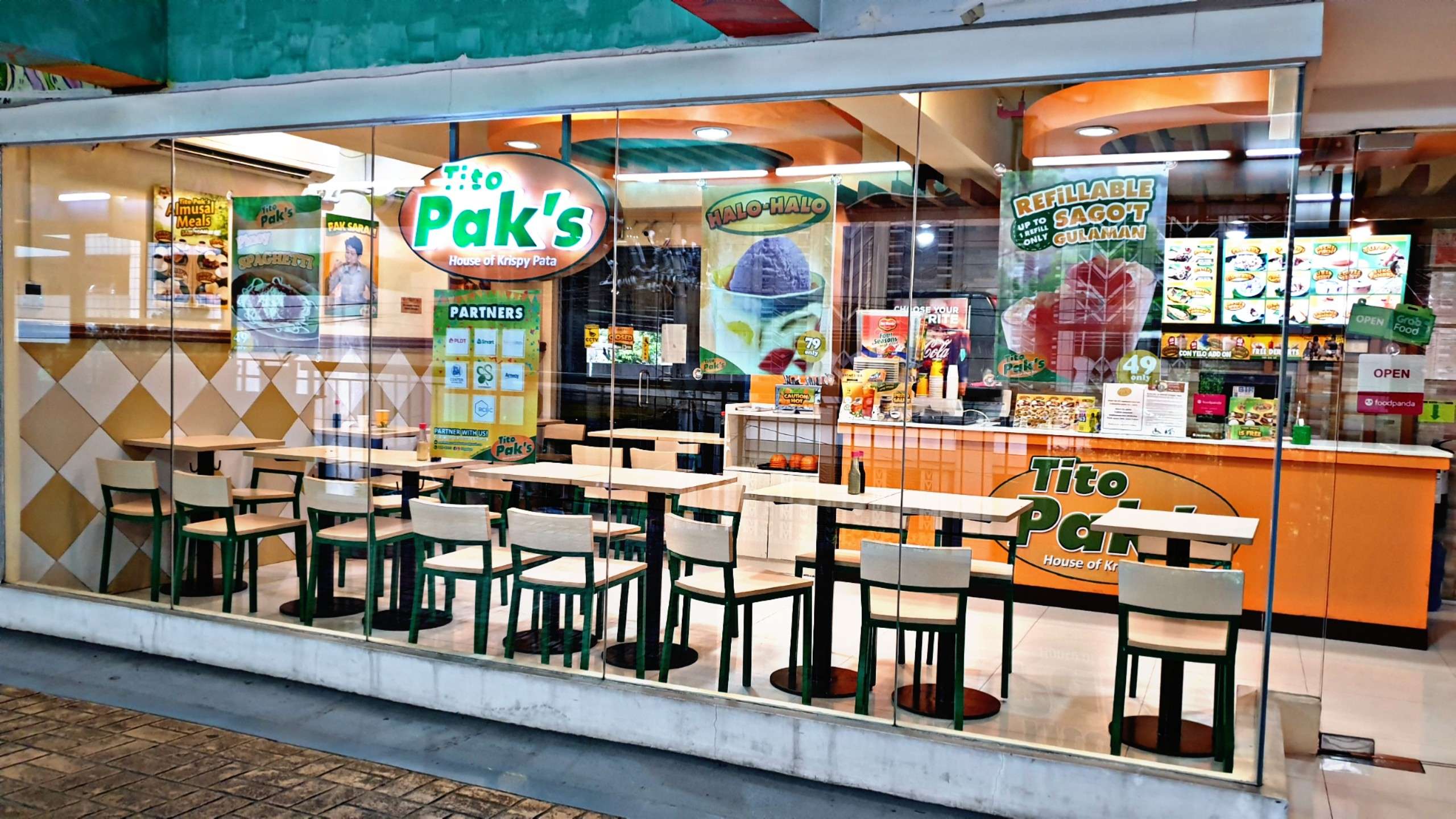 I like that it's crushed ice. You don't have to wait long for the ice to melt. Good find!

Krispy Kreme because of "crispy pata"? Hehehe... "pata" means pork hock so this restaurant's tag line is basically about their specialty.

We also have the shaved ice and is usually called ice scramble. This sago't gulaman just happen to have a little twist. It is usually just water that is added, not shaved ice.

Howdy again macoolette! What a nice place with such a variety and those drinks look good, I've never heard of them! But they must be sweet so they have to be good!

You can actually try preparing them at home. It is very easy. Just buy the gelatin and sago, cook them, mix with chilled water, add sugar to your liking and you're good to go! 👍😊

oh very cool macoolette! I'm sure I could use a sugar replacement like Xzylitol too.

Sure, xylitol will be good. Aside from the chemical composition, I can't actually say the difference in taste with sugar.

howdy today macoolette! I agree, I usually can't tell much difference compared to regular sugar, maybe a little sometimes but it's close enough!

Thank you for entering our <Beverages with friends> Contest . Thanks to @macoolette, Tasteem has become a more attractive guide. We upvote your post, wish you the best of luck in winning our Contest!

Congratulations @macoolette! You have completed the following achievement on the Steem blockchain and have been rewarded with new badge(s) :

You can view your badges on your Steem Board and compare to others on the Steem Ranking If you no longer want to receive notifications, reply to this comment with the word STOP

Vote for @Steemitboard as a witness to get one more award and increased upvotes!

@ocdb is a non-profit bidbot for whitelisted Steemians, current max bid is 20 SBD and the equivalent amount in STEEM. Check our website https://thegoodwhales.io/ for the whitelist, queue and delegation info. Join our Discord channel for more information.

If you like what @ocd does, consider voting for ocd-witness through SteemConnect or on the Steemit Witnesses page. :)